A Chain of Impact Craters on Callisto 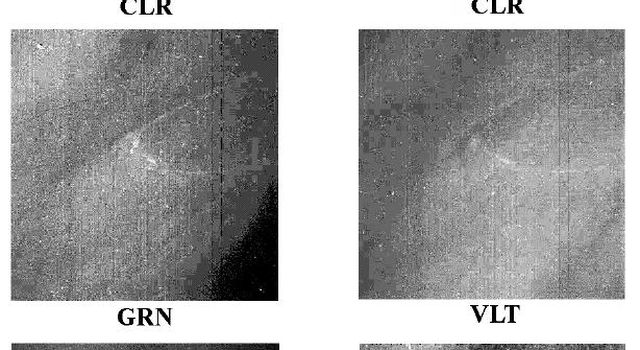 This "family portrait," a composite of the Jovian system, includes the edge of Jupiter with its Great Red Spot, and Jupiter's four largest moons, known as the Galilean satellites. From top to bottom, the moons shown are Io, Europa, Ganymede and Callisto.

Europa, the smallest of the four moons, is about the size of Earth's moon, while Ganymede is the largest moon in the solar system. North is at the top of this composite picture in which the massive planet and its largest satellites have all been scaled to a common factor of 15 kilometers (9 miles) per picture element.

The Solid State Imaging (CCD) system aboard NASA's Galileo spacecraft obtained the Jupiter, Io and Ganymede images in June 1996, while the Europa images were obtained in September 1996. Because Galileo focuses on high resolution imaging of regional areas on Callisto rather than global coverage, the portrait of Callisto is from the 1979 flyby of NASA's Voyager spacecraft.

This image and other images and data received from Galileo are posted on the World Wide Web, on the Galileo mission home page at http://galileo.jpl.nasa.gov. Background information and educational context for the images can be found at: http://www.jpl.nasa.gov/galileo/sepo.