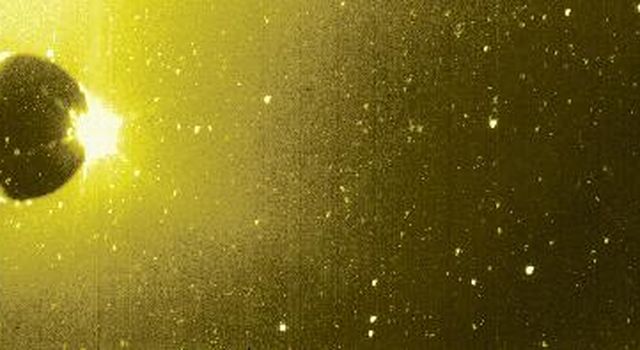 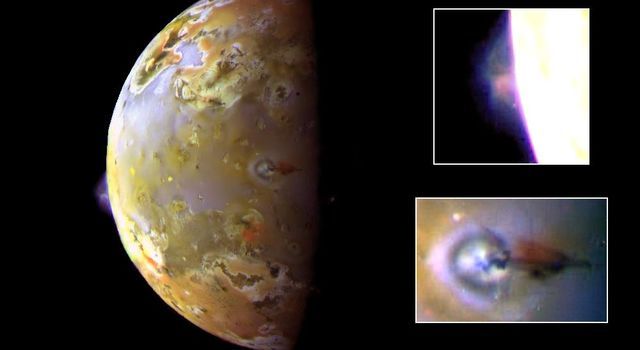 Active Volcanic Plumes on Io
This picture contains two images of Jupiter's moon Io and its surrounding sky. The original frame was exposed twice, once through a clear filter and once through a green-yellow filter. The camera pointed in slightly different directions for the two exposures, placing a clear filter image of Io in the top half of the frame, and a green-yellow filter image of Io in the bottom half of the frame. This picture shows the entire original frame with the addition of intensity contours and false color. East is to the right.

Most of Io's visible surface is in shadow, though part of a white crescent can be seen on its western side. This crescent is being illuminated mostly by "Jupitershine" (i.e., sunlight reflected off Jupiter). Near Io's eastern equatorial edge is a burst of white light which shows up best in the lower image. This sunlight being scattered by the plume of the volcano Prometheus. Prometheus lies just beyond the visible edge of the moon on Io's far side. Its plume extends about 100 kilometers above the surface, and is being hit by sunlight just a little east of Io's eastern edge.

The sky is full of diffuse light, some of which is scattered light from Prometheus' plume and Io's lit crescent (particularly in the half of the frame dominated by the clear filter). However, much of the diffuse emission comes from Io's Sodium Cloud: sodium atoms within Io's extensive material halo are scattering sunlight into both the clear and green-yellow filters at a wavelength of about 589 nanometers.

The intensity contours help to illustrate that: (i) significant diffuse emission is present all the way to the eastern edge of the frame (indeed, the Sodium Cloud is known to extend far beyond that edge); (ii) the diffuse emission exhibits a directional feature at about four o'clock relative to Io's center (similar features have been seen in the Sodium Cloud at greater distances from Io).

The upper image of Io exhibits a roundish white spot in the bottom half of Io's shadowed side. This corresponds to thermal emission from the volcano Pele. The lower image bears a much smaller trace of this emission because the clear filter is far more sensitive than the green-yellow filter to those relatively long wavelengths where thermal emission is strongest.

This image was taken at 5 hours 30 minutes Universal Time on Nov. 9, 1996 by the solid state imaging (CCD) system aboard NASA's Galileo spacecraft. Galileo was then in Jupiter's shadow, and located about 2.3 million kilometers (about 32 Jovian radii) from both Jupiter and Io.

The Jet Propulsion Laboratory, Pasadena, CA, manages the mission for NASA's Office of Space Science, Washington D.C. This image and other images and data received from Galileo are posted on the World Wide Web Galileo mission home page at: http://galileo.jpl.nasa.gov.