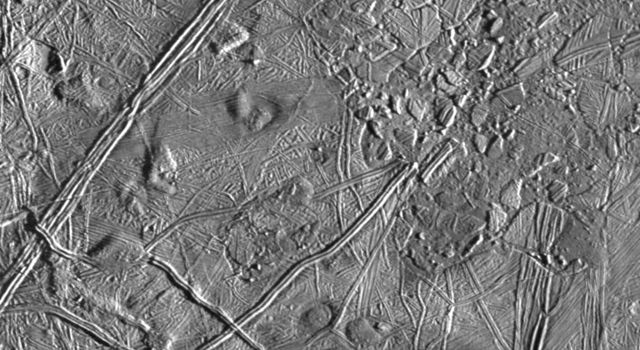 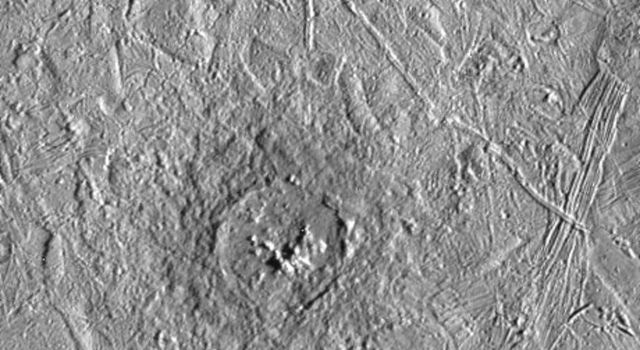 This moderate-resolution view of the surface of one of Jupiter's moons, Europa, shows the complex icy crust that has been extensively modified by fracturing and the formation of ridges. The ridge systems superficially resemble highway networks with overpasses, interchanges and junctions. From the relative position of the overlaps, it is possible to determine the age sequence for the ridge sets. For example, while the 8-kilometer-wide (5-mile) ridge set in the lower left corner is younger than most of the terrain seen in this picture, a narrow band cuts across the set toward the bottom of the picture, indicating that the band formed later. In turn, this band is cut by the narrow 2- kilometer-wide (1.2-mile) double ridge running from the lower right to upper left corner of the picture. Also visible are numerous clusters of hills and low domes as large as 9 kilometers (5.5 miles) across, many with associated dark patches of non-ice material. The ridges, hills and domes are considered to be ice-rich material derived from the subsurface. These are some of the youngest features seen on the surface of Europa and could represent geologically young eruptions.

This area covers about 140 kilometers by 130 kilometers (87 miles by 81 miles) and is centered at 12.3 degrees north latitude, 268 degrees west longitude. Illumination is from the east (right side of picture). The resolution is about 180 meters (200 yards) per pixel, meaning that the smallest feature visible is about a city block in size. The picture was taken by the Solid State Imaging system on board the Galileo spacecraft on February 20, 1997, from a distance of 17,700 kilometers (11,000 miles) during its sixth orbit around Jupiter.