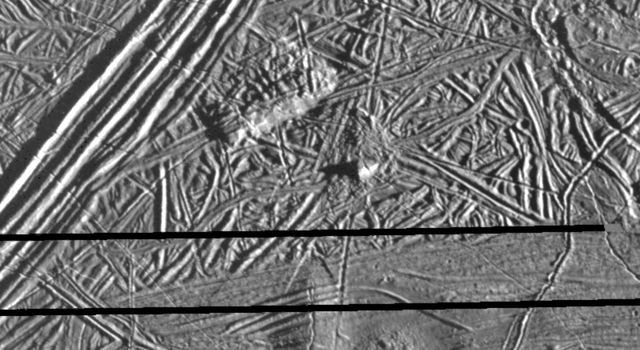 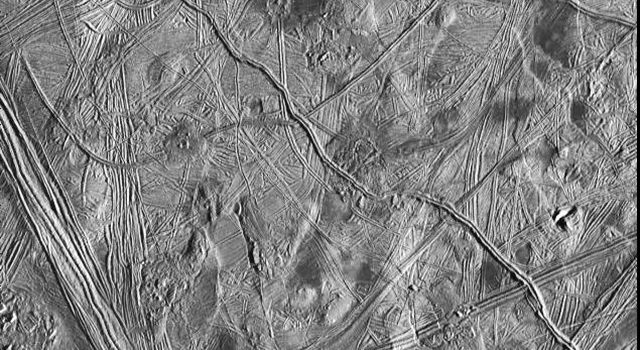 This complex terrain on Jupiter's moon, Europa, shows an area centered at 8 degrees north latitude, 275.4 degrees west longitude, in the trailing hemisphere. As Europa moves in its orbit around Jupiter, the trailing hemisphere is the portion which is always on the moon's backside opposite to its direction of motion. The area shown is about 100 kilometers by 140 kilometers (62 miles by 87 miles). The complex ridge crossing the picture in the upper left corner is part of a feature that can be traced hundreds of miles across the surface of Europa, extending beyond the edge of the picture. The upper right part of the picture shows terrain that has been disrupted by an unknown process, superficially resembling blocks of sea ice during a springtime thaw. Also visible are semicircular mounds surrounded by shallow depressions. These might represent the intrusion of material punching through the surface from below and partial melting of Europa's icy crust. The resolution of this image is about 180 meters (200 yards); this means that the smallest visible object is about a quarter of a mile across.

This picture of Europa was taken by Galileo's Solid State Imaging system from a distance of 17,900 kilometers (11,100 miles) on the spacecraft's sixth orbit around Jupiter, on February 20, 1997.