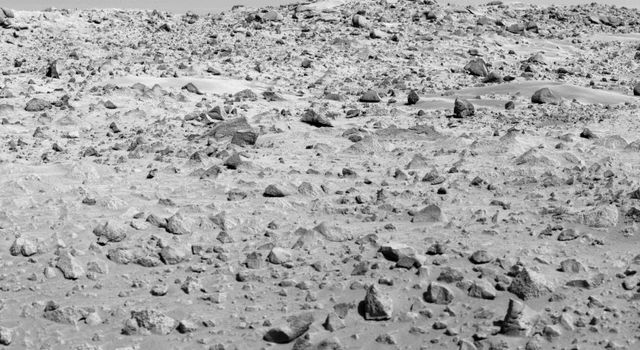 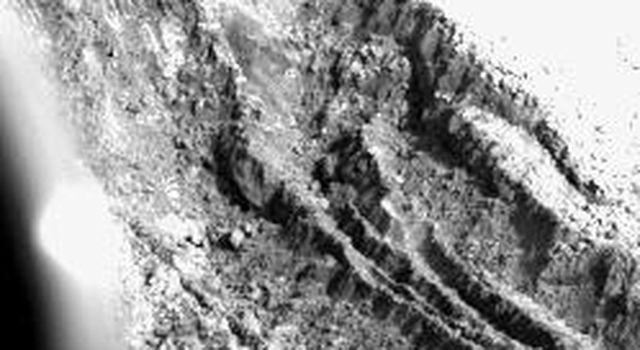 This Viking Lander 2 picture from Utopia Planitia shows the first clear indication of frost accumulation on the Martian surface seen by lander cameras. The picture, looking due north, was obtained with a blue filter at 12:59 p.m. local lander time, Sept. 13, 1977. The season is late winter. Frost appears as a white accumulation around the bottom of rocks, in a trench dug by the lander sampler arm, and in scattered patches on the darker surface. The shadow of the lander, including the camera (center) and the meteorology boom (left), appears in foreground. As the sun moves, the shadow is moving from left to right, exposing areas covered by frost and previously protected from the sun by the lander shadow. (Another image taken one-half hour later suggests the frost patches have become smaller.) Apparently frost, formed during the Martian night, at least partially disappears during the warmer daytime. The composition of the frost, whether carbon dioxide or water or a mixture of the two (CO2 clathrate), is not known. Measurements from the meteorology instrument indicate minimum nighttime temperatures of 160 Kelvin (-171 Fahrenheit). At the time the image was taken, the temperature had risen to 175 Kelvin (-144 Fahrenheit). The atmospheric pressure was 8.835 millibars. This combination of pressure and temperature are inconsistent with carbon dioxide frost formation, but plausible near-surface mechanisms might have resulted in conditions favorable for CO2 frost formation. Viking orbiter thermal mapping and water vapor instruments indicate temperatures might have been slightly lower than measured by the lander, suggesting that the frost is more likely CO2 than H20. A remote, but possible, explanation is that the material is an extremely bright dust deposit. Color images to be taken will be able to discount this interpretation. The mechanism for frost deposition is unknown. Possibilities include formation directly on the surface, precipitation as snow, or material blown to the area around the lander from colder regions.