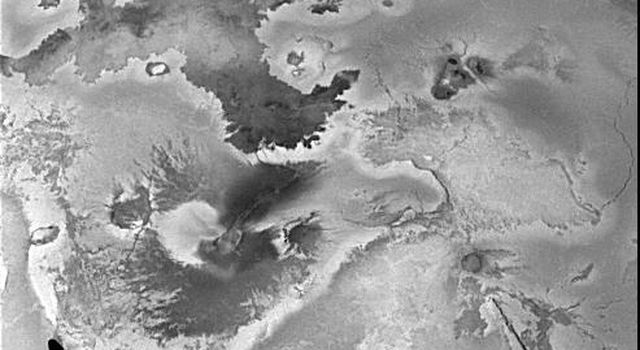 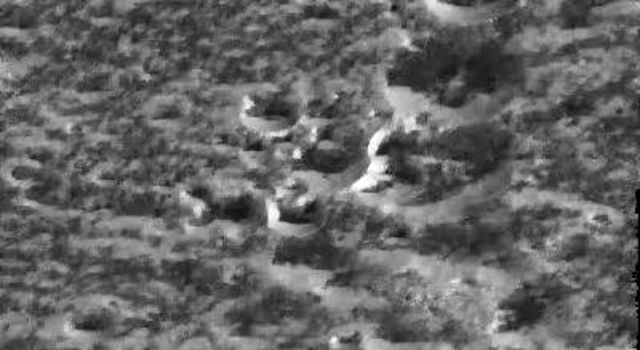 New terrain overlays older terrain, which overlays still older surface, in this view of part of the surface of Jupiter's moon Ganymede, taken by the camera onboard NASA's Galileo spacecraft. Galileo obtained the images that make up this mosaic when it flew past Jupiter's moon Ganymede for the second time on September 6, 1996. An area about 54 kilometers (33 miles) wide and 90 kilometers (55 miles) high is shown. Northern Marius Regio (the dark terrain at bottom), Philus Sulcus (bright terrain at center), and Nippur Sulcus (bright terrain at top) are seen illuminated by the Sun from the southeast (north is at the top).

The key characteristics and relationships of the major terrain types on tectonically active Ganymede are seen at a resolution 16 times better than images taken by the Voyager spacecraft in 1979. At the bottom, the ancient dark terrain is seen to be very deformed by tectonic fractures and faults. An impact crater about 18 kilometers (about 11 miles) in diameter has been highly modified by faulting. More recent cross-cutting fractures and faults at center illustrate to scientists the sequence of events that have created the younger bright terrain. The lines in the middle left of the image are faults that are cross-cut by younger faults in the upper part of the image. The smooth band in the upper middle of the image may represent water-ice volcanic deposits flooding a fault valley. Clusters of small craters, representing ejecta transported from distant craters and re-impacting here, are seen in the middle of the photo. The images that make up this mosaic were taken at a range of about 11,620 kilometers (about 7,200 miles).

The Jet Propulsion Laboratory, Pasadena, CA, manages the mission for NASA's Office of Space Science, Washington, DC. This image and other images and data received from Galileo are posted on the Galileo mission home page on the World Wide Web at http://galileo.jpl.nasa.gov. Background information and educational context for the images can be found at http://www.jpl.nasa.gov/galileo/sepo.