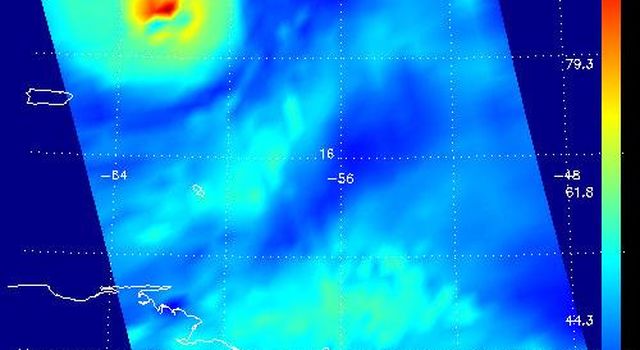 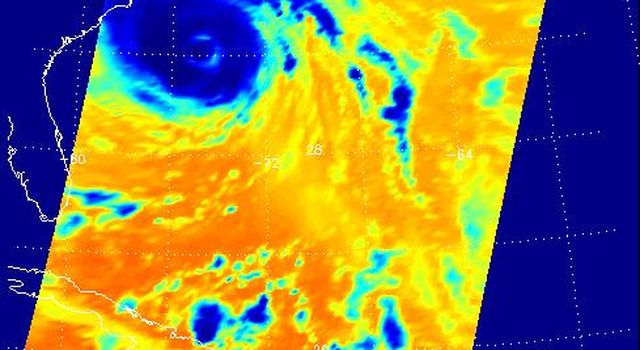 These two images show Hurricane Isabel as viewed by AIRS and each of the two SeaWinds scatterometers on the ADEOS-2 and QuikScat satellites, all JPL-managed experiments. AIRS data are used to create global three-dimensional maps of temperature, humidity and clouds, while scatterometers measure surface wind speed and direction.

Figure 1 shows Isabel on September 13, 2003, when it was a Category 5 storm threatening the Caribbean and southern United States. At the time Isabel was the strongest Atlantic storm since hurricane Mitch killed thousands in central America in 1997. The red vectors in the image show Isabel's surface winds as measured by SeaWinds on ADEOS-2, and the background colors show the temperature of clouds and surface, as viewed in the infrared by AIRS. The hurricane's powerful swirling winds are apparent. These winds circle the hurricane's eye, seen as the red dot near the middle top of the image. Light blue areas shows adjacent cold clouds tops associated with strong thunderstorms embedded within the storm.

Figure 2 shows Isabel as it approached landfall on the outer banks of North Carolina on September 18. The hurricane weakened in the five days since the earlier image was observed, as indicated by a less clearly defined eye. Nevertheless, it was still a powerful storm. The winds blowing onshore north of the eye knocked over trees, blew roofs off buildings, and drove large waves that breached the coastal barrier islands in many places. Water, transportation and power are still not fully restored to many of the areas in the image. The winds apparently blowing away from the eye of the storm are an artifact of one of the hurricane's other destructive phenomena: rain. The darkest blue clouds observed by AIRS show the most intense thunderstorms, and hence the heaviest rains. Hard rain fools the SeaWinds on QuikSCAT system into thinking the winds are blowing directly across the viewing 'swath.' Nevertheless, the two systems give a consistent picture of this storm.