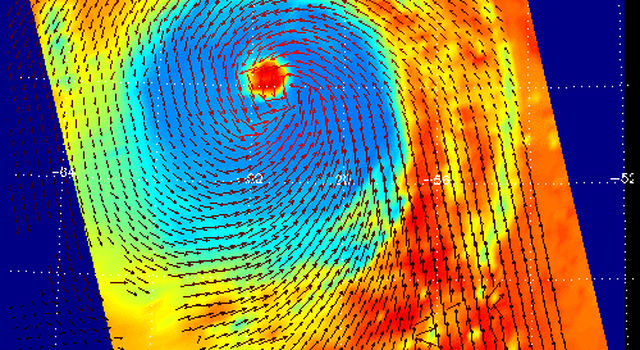 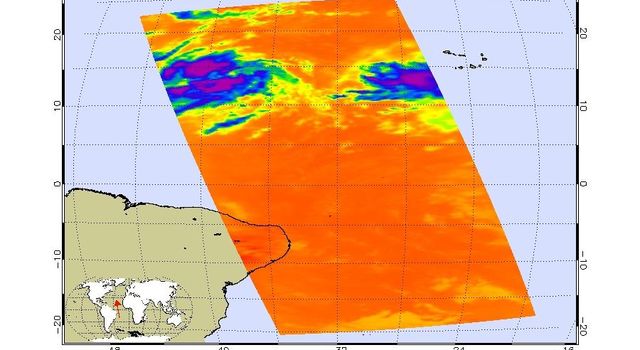 Tropical Depression 6 (Florence) in the Atlantic

September 18, 2003
These two false-color images show Hurricane Isabel viewed by the AIRS and AMSU-A instruments at 1:30 EDT in the morning of Thursday September 18, 2003. Isabel will be ashore within 12 hours, bringing widespread flooding and destructive winds. In figure 1 on the left, data retrieved by the AIRS infrared sensor shows the hurricane's eye as the small ring of pale blue near the upper left corner of the image. The dark blue band around the eye shows the cold tops of hundreds of powerful thunderstorms. These storms are embedded in the 120 mile per hour winds swirling counterclockwise around Isabel's eye. Cape Hatteras is the finger of land north-northwest of the eye. Isabel's winds will soon push ashore a 4- to 8-foot high mound of 'storm surge' and accompanying high surf, leading to flooding of Cape Hatteras and other islands of North Carolina's Outer Banks. Also seen in the image are several organized bands of cold, (blue) thunderstorm tops being pulled into the storm center. Other thunderstorm are forming north of the islands of Jamaica, Cuba, Hispaniola and Puerto Rico near the bottom of the picture.

Figure 2 shows the geographical distribution and total amount of atmospheric water vapor associated with Isabel as inferred by AIRS and AMSU-A. Very humid areas appear deep red and surround the storm's eye in the ring of thunderstorms, as seen above. The enhancement of atmospheric water vapor in the storm is maintained by evaporation from the wind-churned sea surface. In turn, the water vapor powers the thunderstorms by condensing as rain and releasing the ocean's warmth into the atmosphere to drive strong convection. This makes Isabel and other hurricanes 'heat engines,' converting ocean water's warmth into atmospheric gales. Isabel is weakening as it move ashore and loses its supply of energy from warm water, but not before raining an expected 6-12 inch thick layer of its water over an area extending from South Carolina and New England to the midwest and southern Canada. Paler blue areas in the water vapor image show less humid heights of the atmosphere, which are associated with the colder thunderstorm tops seen in the infrared image.