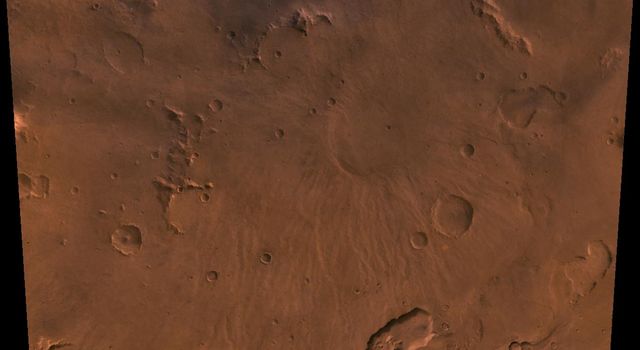 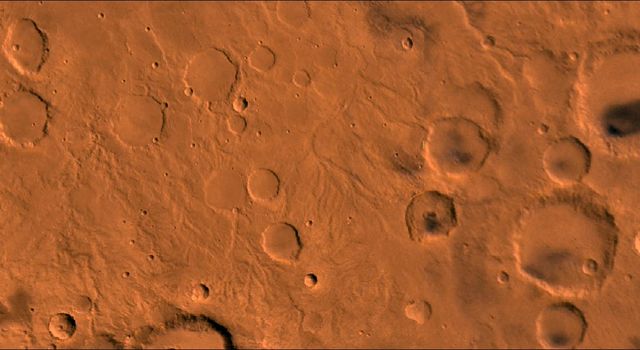 Color image of Ma'adim Vallis region of Mars; north toward top. Image shows the 600-km-long channel that drained into impact crater Gusev. Crater Gusev is about 160 km in diameter. This image is a composite of Viking medium-resolution images in black and white and low-resolution images in color. The image extends from latitude 13 degrees S. to 29 degrees S. and from longitude 180 degrees to 188 degrees; Mercator projection. Ma'adim Vallis is cut into the degraded highlands of Mars and has morphologic characteristics of terrestrial river beds, including the well-developed dentritic tributaries that constitute an integrated river system. However, the junction angles between tributaries commonly show a wide variation, which gives the channel system a more random directional pattern than typical terrestrial drainage networks. Topographic contours suggest a large drainage basin once existed for this channel. Gradients for the channel are high, about 0.007, over the central 300 km of its length; this is about two times that of the upper 450 km of the Colorado River. In places, some tributaries are discontinuous, perhaps indicating burial by more recent material. After the channel breaches Gusev it appears to end within the crater. Termination may have resulted from burial by younger deposits or perhaps the flow percolated into the surface materials and continued underground.