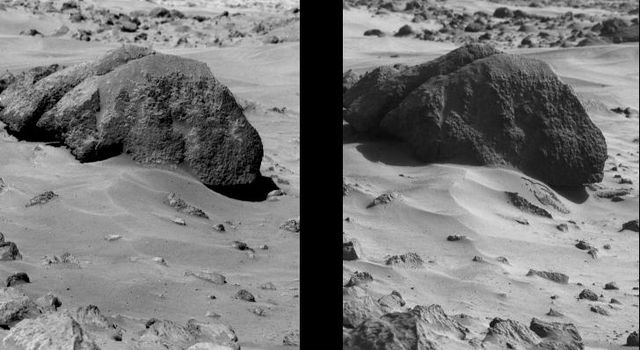 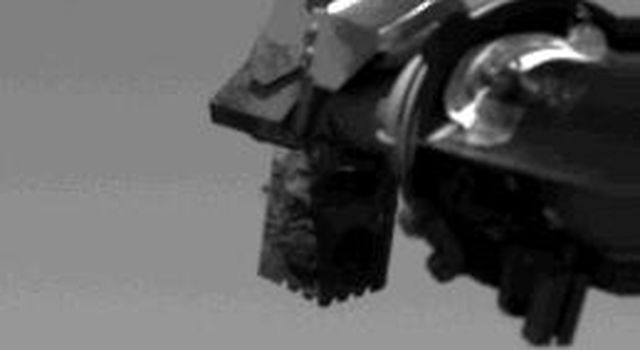 Viking 2's first picture on the surface of Mars was taken within minutes after the spacecraft touched down on September 3. The scene reveals a wide variety of rocks littering a surface of fine-grained deposit. Boulders in the 10 to 20-centimeter (4 to 8-inch) size range-- some vesicular (holes) and some apparently fluted by wind--are common. Many of the pebbles have tabular or platy shapes, suggesting that they may be derived from layered strata. The fluted boulder just above the Lander s footpad displays a dust-covered or scraped surface, suggesting it was overturned or altered by the foot at touchdown. Just as occurred with Viking l s first picture on July 20, brightness variations at the beginning of the picture scan (left edge) probably are due to dust settling after landing. A substantial amount of fine-grained material kicked up by the descent engines has accumulated in the concave interior of the footpad. Center of the image is about 1.4 meters (5 feet) from the camera. Field of view extends 70 from left to right and 20 from top to bottom. Viking 2 landed at a region called Utopia in the northern latitudes about 7500 kilometers (4600 miles) northeast of Viking l s landing on the Chryse plain 45 days earlier.