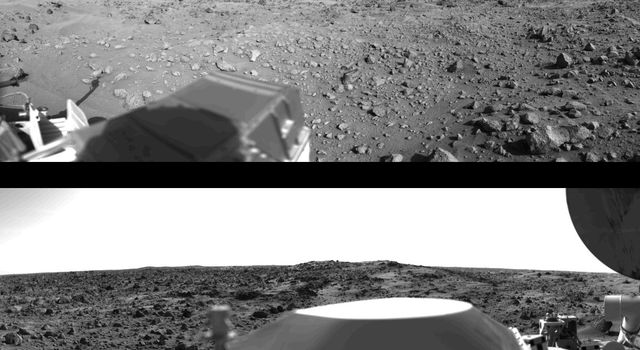 First Panoramic View From The Surface Of Mars

Those Martian weather reports, received here daily from more than 200 million miles away, start right here at Viking l's meteorology instrument. Mounted atop the extended boom, the meteorology sensors face away from the spacecraft. They stand about four feet above the surface and measure atmospheric pressure, temperature, wind velocity and wind direction. The cable parallel to the boom is connected inside the spacecraft body with the electronics for operating the sensors, reading the data and preparing it for transmission to Earth. A second Mars weather station will begin operation next month when Viking 2 lands somewhere in the planet's northern latitude Viking 2 arrives at Mars and goes into orbit tomorrow (August 7).