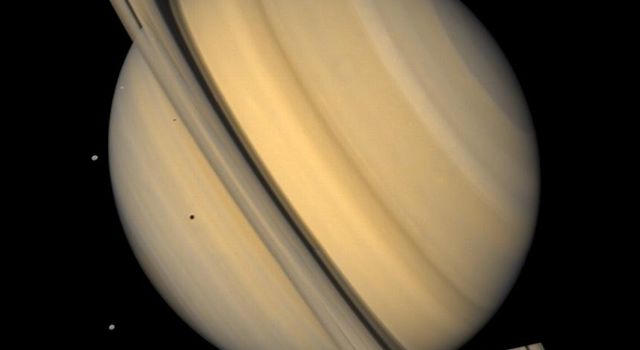 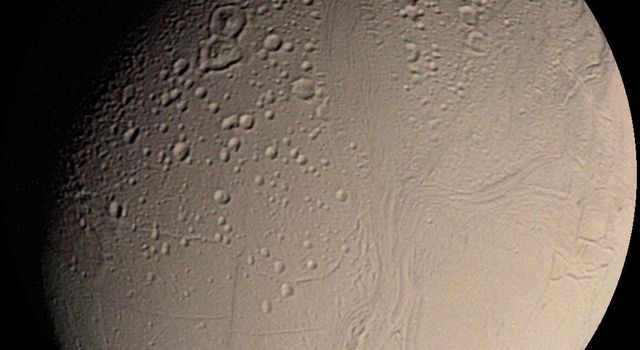 This enhanced-color picture shows Saturn, its rings, and four of its icy satellites. Three satellites (Tethys, Dione, and Rhea) are visible against the darkness of space, and another smaller satellite (Mimas) is visible against Saturn's cloud tops very near the left horizon and just below the rings. The dark shadows of Mimas and Tethys are also visible on Saturn's cloud tops, and the shadow of Saturn is seen across part of the rings. Saturn, second in size only to Jupiter in our Solar System, is 120,660 km (75,000 mi) in diameter at its equator (the ring plane) but, because of its rapid spin, Saturn is 10% smaller measured through its poles. Saturn's rings are composed mostly of ice particles ranging from microscopic dust to boulders in size. These particles orbit Saturn in a vast disk that is a mere 100 meters (330 feet) or so thick. The rings' thinness contrasts with their huge diameter--for instance 272,400 km (169,000 mi) for the outer part of the bright A ring, the outermost ring visible here. The pronounced concentric gap in the rings, the Cassini Division (named after its discoverer), is a 3500-km wide region (2200 mi, almost the width of the United States) that is much less populated with ring particles than the brighter B and A rings to either side of the gap. The rings also show some enigmatic radial structure ('spokes'), particularly at left. This image was synthesized from images taken in Voyager's orange, blue, and ultraviolet filters and was processed to create an exaggerated false color.