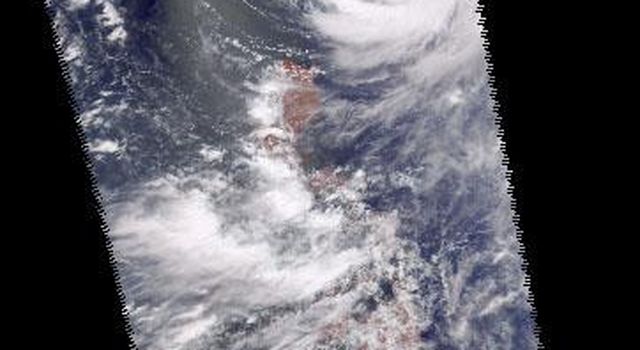 Global View of Earth in the Near-Infrared

Four images of the Mediterranean obtained concurrently on June 14, 2002 from the three instruments that make up the Atmospheric Infrared Sounder experiment system aboard NASA's Aqua spacecraft. The system features thousands of individual channels that observe Earth in the visible, infrared and microwave spectral regions. Each channel has a unique sensitivity to temperature, moisture, surface conditions and clouds.

This visible light image from the AIRS instrument shows a band of white clouds extending from the Adriatic Sea over Greece to the Black Sea.

The AIRS image (figure 1) at 900 cm-1 (11 micrometers) measures actual surface or cloud top temperatures. In it, land and ocean boundaries are well defined, with land appearing as warmer (darker red) than the ocean. The band of cold high cumulus clouds appears blue, with the darkest blue most likely a large thunderstorm.

The 150 gigahertz channel from the Humidity Sounder for Brazil instrument (figure 2) is sensitive to moisture, ice particles and precipitation. The dry land temperature is comparable to the 11 micrometer temperatures, but over ocean this channel measures the temperature of moisture in the mid troposphere. The cold, blue areas off Sicily and in the Aegean Sea represent unusually dry areas over the ocean. There, clouds appear as green filaments--likely areas of precipitation.

The 31.4 gigahertz channel from the Advanced Microwave Sounding Unit instrument (figure 3) is not affected by clouds.

NASA's Atmospheric Infrared Sounder (AIRS) onboard NASA's Aqua spacecraft, began sending high quality data on June 12, 2002. This "first light" data is exceeding the expectations of scientists, confirming that the AIRS experiment is well on its way to meeting its goals of improving weather forecasting, establishing the connection between severe weather and climate change, determining if the global water cycle is accelerating, and detecting the effects of increased greenhouse gases.

About Airs The Atmospheric Infrared Sounder, AIRS, in conjunction with the Advanced Microwave Sounding Unit, AMSU, senses emitted infrared and microwave radiation from Earth to provide a three-dimensional look at Earth's weather and climate. Working in tandem, the two instruments make simultaneous observations all the way down to Earth's surface, even in the presence of heavy clouds. With more than 2,000 channels sensing different regions of the atmosphere, the system creates a global, three-dimensional map of atmospheric temperature and humidity, cloud amounts and heights, greenhouse gas concentrations, and many other atmospheric phenomena. The Humidity Sounder for Brazil, HSB, is a 4-channel microwave sounder provided by Brazil that obtained humidity profiles throughout the atmosphere even under conditions of heavy cloudiness and haze. The HSB provided high quality data until February 2003. Launched into Earth orbit in 2002, the AIRS, AMSU, and HSB instruments fly onboard NASA's Aqua spacecraft and are managed by NASA's Jet Propulsion Laboratory in Pasadena, Calif., under contract to NASA. JPL is a division of the California Institute of Technology in Pasadena.