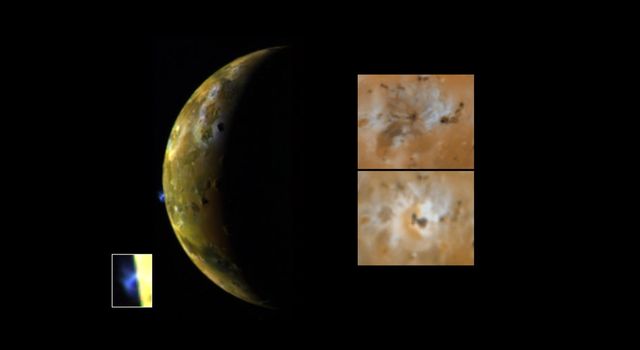 Three full-disk color views of Jupiter's volcanic moon Io as seen by NASA's Galileo spacecraft camera are shown in enhanced color (near-infrared-, green-, and violet-filtered images) to highlight details of the surface. Comparisons of these images to those taken by the Voyager spacecraft 17 years ago has revealed many changes have occurred on Io. Since that time, about a dozen areas at least as large as the state of Connecticut have been resurfaced. These three views, taken by Galileo in late June 1996, show about 75 percent of Io's surface. The images reveal that some areas on Io are truly red, whereas much of the surface is yellow or light greenish. The major red areas shown here appear to be closely associated with very recent fragmental volcanic deposits (pyroclastics) erupted in the form of volcanic plumes. The most prominent red oval surrounds the volcano Pele (far right), as previously discovered by Hubble Space Telescope images. An intense red spot lies near the active plume Marduk east of Pele. Other reddish areas are associated with known hot spots or regions that have changed substantially since the Voyager spacecraft flybys of 1979. The reddish deposits may be the products of high-temperature explosive volcanism. There are some curious differences in the overlap region between the images at left and center. There are several especially bright areas in the image at left that appear much darker in the image at center. These may represent transient eruptions or surface materials with unusual light-scattering properties. Several volcanic plumes active during the Voyager flybys in 1979 occurred near the bright limbs or terminator regions of these images, where airborne materials should be detectable. Loki and Amirani appear to be inactive, Volund is active, and Pele may be active but is extremely faint. The plume Marduk also seems to be active, and dark jets of erupting materials can be seen against the disk. Several previously unknown mountains can be seen near the terminators. The Galileo mission is managed by NASA's Jet Propulsion Laboratory.