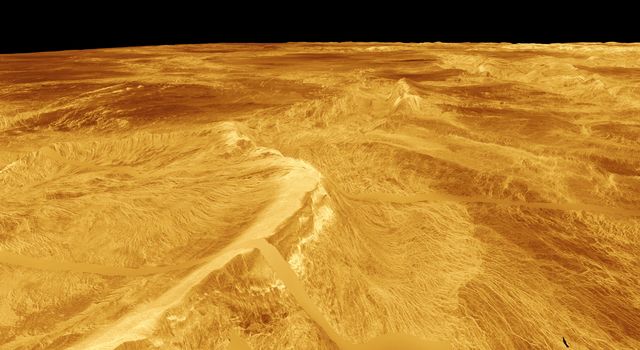 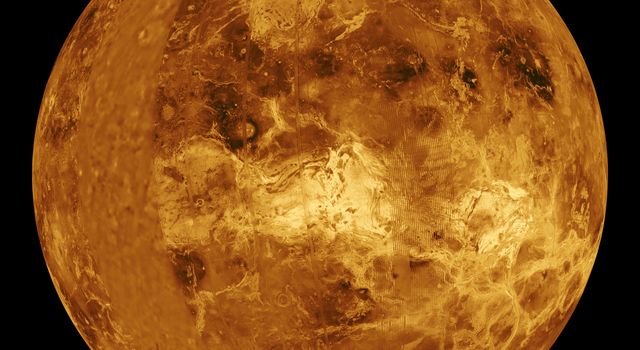 During the third global cycle of Magellan's radar mapping mission, images were obtained at viewing angles that were slightly different than those used in the first two cycles. This strategy was designed to produce stereo image pairs, which take advantage of distortions induced by the different views to provide details of the surface topography. This is a stereo image pair of crater Goeppert-Mayer, named for the 20th Century Polish physicist and Nobel laureate (60 degrees north latitude, 26.5 degrees east longitude). The crater, 35 kilometers (22 miles) in diameter, lies above an escarpment at the edge of a ridge belt in southern Ishtar Terra. West of the crater the scarp has more than one kilometer (0.6 mile) of relief. Perception of relief may be obtained with stereo glasses or a stereoscope. Some individuals may be able to fuse the images without the aid of those devices. The radar illumination for both images is from the west, or left side of the scene. Incidence angles are: (Cycle 1 (left) 28 degrees, Cycle 3 (right) 15 degrees from vertical. Analysis of stereo image pairs allows planetary scientists to resolve details of topographic relationships on Venusian craters, volcanoes, mountain belts and fault zones. The spatial resolution of this topographic information is approximately ten times better than that obtained by Magellan's altimetry experiment.