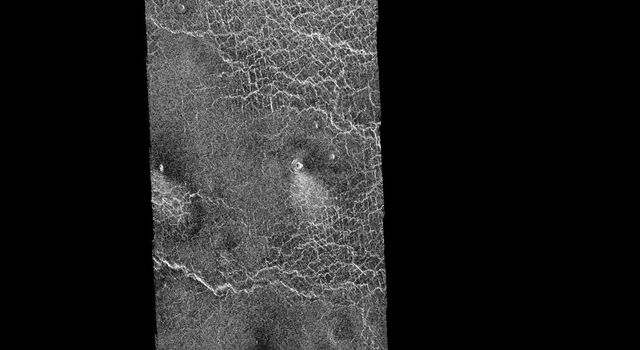 This Magellan radar image is of part of the Phoebe region of Venus. It is a mosaic of parts of revolutions 146 and 147 acquired in the first radar test on Aug. 16, 1990. The area in the image is located at 291 degrees east longitude, 20 degrees south latitude. The image shows an area 30 kilometers (19.6 miles) wide and 76 km (47 miles) long. The image shows a broad, up to 17 km (11 miles) wide, radar bright, lobate lava flow that extends 25 km (15.5 miles) northwest across the image strip. The volcanic flow appears bright in this image because it is rough on a scale of a few centimeters to a few meters (a few inches to a few yards), much like lava flows on Earth that are called by geologists "aa" (ah-ah), a Hawaiian word that probably mimics the sound the ancients uttered while running barefoot over the rough, jagged surface. It is located near the southeast flank of Phoebe Regio and has flowed into local topographic lows. This lava flow has flooded the darker plains and appears to have buried north-south trending lineaments that cut the darker material. No obvious volcanic sources area visible in this image. The flow has a markedly uniform surface texture in contrast to the more mottled texture of adjacent deposits; this suggests it may represent the most recent in a series of eruptions that subsequently have been obscured. To the north and south are northwest trending graben crustal depression, or fault, areas that may belong to the system of fractures associated with Phoebe Regio.