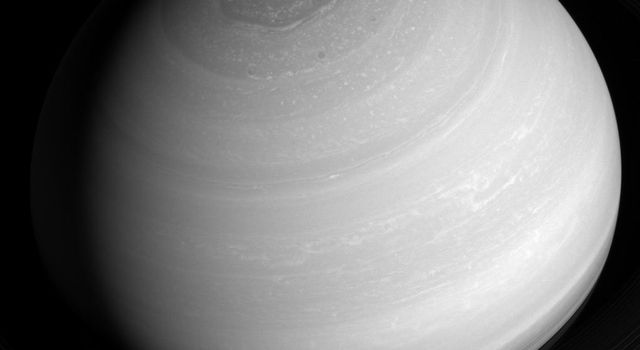 This false-color photograph is a composite of 15 images of the Moon taken through three color filters by Galileo's solid-state imaging system during the spacecraft's passage through the Earth-Moon system on December 8, 1992. When this view was obtained, the spacecraft was 425,000 kilometers (262,000 miles) from the Moon and 69,000 kilometers (43,000 miles) from Earth. The false-color processing used to create this lunar image is helpful for interpreting the surface soil composition. Areas appearing red generally correspond to the lunar highlands, while blue to orange shades indicate the ancient volcanic lava flow of a mare, or lunar sea. Bluer mare areas contain more titanium than do the orange regions. Mare Tranquillitatis, seen as a deep blue patch on the right, is richer in titanium than Mare Serenitatis, a slightly smaller circular area immediately adjacent to the upper left of Mare Tranquillitatis. Blue and orange areas covering much of the left side of the Moon in this view represent many separate lava flows in Oceanus Procellarum. The small purple areas found near the center are pyroclastic deposits formed by explosive volcanic eruptions. The fresh crater Tycho, with a diameter of 85 kilometers (53 miles), is prominent at the bottom of the photograph, where part of the Moon's disk is missing.