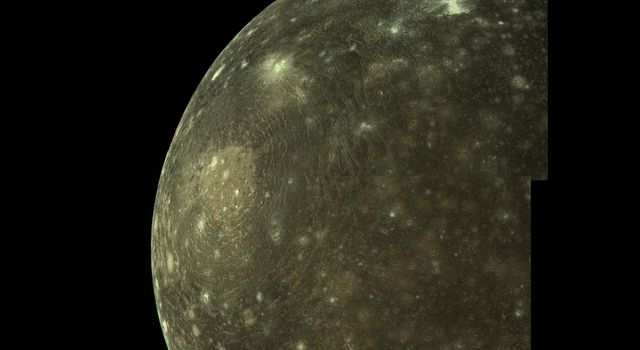 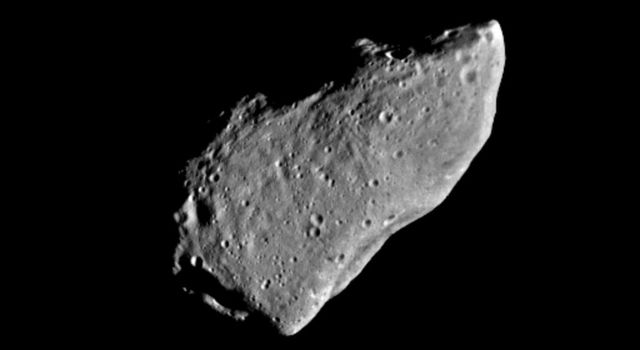 These two color views of the asteroid Gaspra were produced by combining three images taken through violet, green, and infrared filters by the Galileo spacecraft on October 29, 1991, from a distance of about 16,000 kilometers (10,000 miles). The view on the left shows Gaspra in approximately true color; the surface is covered with rocks that are somewhat less grey than those on Earth's moon. In the version on the right, the colors were enhanced to bring out the muted color variations on the asteroid and to increase the ability to discriminate between surface features. The subtle variations in color may be due to slight differences in rock composition or to differences in the texture of the surface layer. These possibilities should be resolved once the rest of Galileo's Gaspra data are played back in 1992. Gaspra is about 19 by 12 by 11 kilometers (12 by 7.4 by 7 miles) and irregular in shape. The illuminated portion seen in these views is about 16 by 12 kilometers. These color images were produced for the Galileo project by the U.S. Geological survey, Flagstaff, Arizona. The Galileo project whose primary mission is the exploration of the Jupiter system in 1995-97, is managed for NASA's Office of Space Science and Applications by the Jet Propulsion Laboratory.