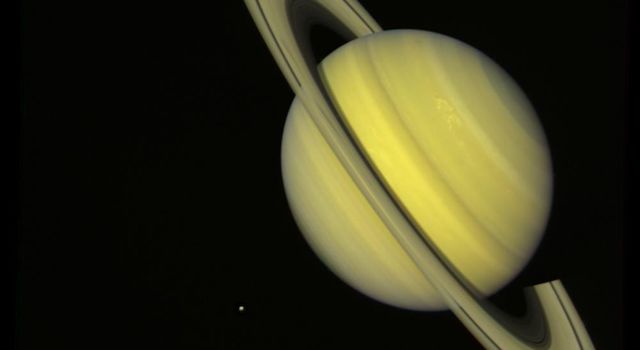 This full-disk image of Jupiter's satellite Io was made from several frames taken by Voyager 1 on March 4, 1979, as the spacecraft neared the satellite. Io is about 862,000 kilometers (500,000 miles) away here. A variety of features can be seen in the photo that appear linked to the intense volcanic activity on Io: the circular, donut-shaped feature in the center has been identified with a known erupting volcano; other, similar features can be seen across the face of the satellite. Io's volcanic activity appears to be of at least two general kinds -- explosive eruptions that spew material into the sky as much as 250 kilometers (160 miles) altitude; and lava that flows from vents across the surface. Io is the first body in the solar system (beyond Earth) where active volcanism has been observed. The Voyager project is managed and controlled for NASA's Office of Space Science by the Jet Propulsion Laboratory.