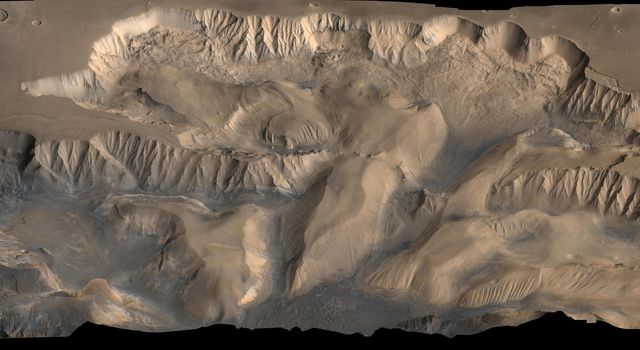 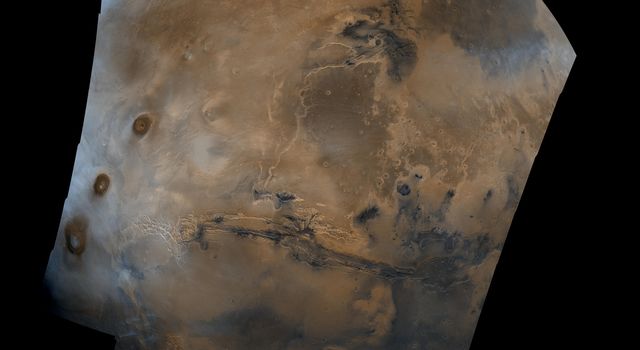 This mosaic is composed of about 100 red- and violet- filter Viking Orbiter images, digitally mosaiced in an orthographic projection at a scale of 1 km/pixel. The images were acquired in 1980 during mid northern summer on Mars (Ls = 89 degrees). The center of the image is near the impact crater Schiaparelli (latitude -3 degrees, longitude 343 degrees). The limits of this mosaic are approximately latitude -60 to 60 degrees and longitude 280 to 30 degrees. The color variations have been enhanced by a factor of two, and the large-scale brightness variations (mostly due to sun-angle variations) have been normalized by large-scale filtering. The large circular area with a bright yellow color (in this rendition) is known as Arabia. The boundary between the ancient, heavily-cratered southern highlands and the younger northern plains occurs far to the north (latitude 40 degrees) on this side of the planet, just north of Arabia. The dark streaks with bright margins emanating from craters in the Oxia Palus region (to the left of Arabia) are caused by erosion and/or deposition by the wind. The dark blue area on the far right, called Syrtis Major Planum, is a low-relief volcanic shield of probable basaltic composition. Bright white areas to the south, including the Hellas impact basin at the lower right, are covered by carbon dioxide frost.