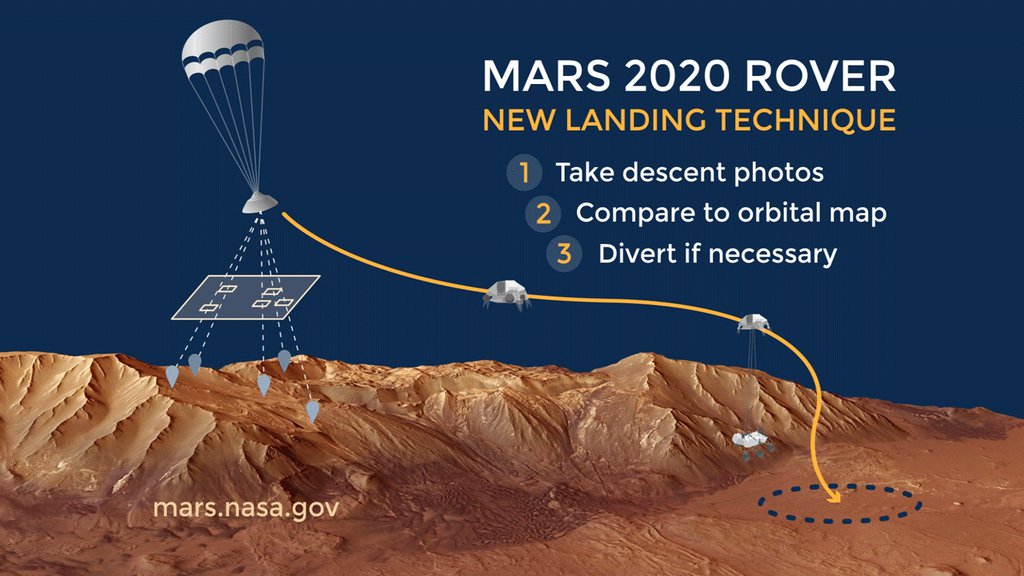 Mars 2020’s Perseverance rover is equipped with a lander vision system based on terrain-relative navigation, an advanced method of autonomously comparing real-time images to preloaded maps that determine the rover’s position relative to hazards in the landing area. Divert guidance algorithms and software can then direct the rover around those obstacles if needed.

How two new technologies will help Perseverance, NASA’s most sophisticated rover yet, touch down onto the surface of Mars this month.

After a nearly seven-month journey to Mars, NASA’s Perseverance rover is slated to land at the Red Planet’s Jezero Crater Feb. 18, 2021, a rugged expanse chosen for its scientific research and sample collection possibilities.

But the very features that make the site fascinating to scientists also make it a relatively dangerous place to land – a challenge that has motivated rigorous testing here on Earth for the lander vision system (LVS) that the rover will count on to safely touch down.

“Jezero is 28 miles wide, but within that expanse there are a lot of potential hazards the rover could encounter: hills, rock fields, dunes, the walls of the crater itself, to name just a few,” said Andrew Johnson, principal robotics systems engineer at NASA’s Jet Propulsion Laboratory in Southern California. “So, if you land on one of those hazards, it could be catastrophic to the whole mission.”

Enter Terrain-Relative Navigation (TRN), the mission-critical technology at the heart of the LVS that captures photos of the Mars terrain in real time and compares them with onboard maps of the landing area, autonomously directing the rover to divert around known hazards and obstacles as needed.

Masten’s Xombie VTVL system sits on a launchpad in Mojave, California in December 2014, prepared for a flight test that would help prove lander vision system capabilities for the Mars 2020 Perseverance rover mission.

If Johnson sounds confident that LVS will work to land Perseverance safely, that’s because it allows the rover to determine its position relative to the ground with an accuracy of about 200 feet or less. That low margin of error and high degree of assurance are by design, and the result of extensive testing both in the lab and in the field.

“We have what we call the trifecta of testing,” explained JPL’s Swati Mohan, guidance, navigation, and control operations lead for Mars 2020.

Mohan said that the first two testing areas – hardware and simulation – were done in a lab.

“That’s where we test every condition and variable we can. Vacuum, vibration, temperature, electrical compatibility – we put the hardware through its paces,” said Mohan. “Then with simulation, we model various scenarios that the software algorithms may encounter on Mars – a too-sunny day, very dark day, windy day – and we make sure the system behaves as expected regardless of those conditions.”

But the third piece of the trifecta – the field tests – require actual flights to put the lab results through further rigor and provide a high level of technical readiness for NASA missions. For LVS’s early flight tests, Johnson and team mounted the LVS to a helicopter and used it to estimate the vehicle’s position automatically as it was flying.

“That got us to a certain level of technical readiness because the system could monitor a wide range of terrain, but it didn’t have the same kind of descent that Perseverance will have,” said Johnson. “There was also a need to demonstrate LVS on a rocket.”

“Testing on the rocket laid pretty much all remaining doubts to rest and answered a critical question for the LVS operation affirmatively,” said JPL’s Nikolas Trawny, a payload and pointing control systems engineer who worked closely with Masten on the 2014 field tests. “It was then that we knew LVS would work during the high-speed vertical descent typical of Mars landings.”

Johnson added that the suborbital testing in fact increased the technology readiness level to get the final green light of acceptance into the Mars 2020 mission.

“The testing that Flight Opportunities is set up to provide was really unprecedented within NASA at the time,” said Johnson. “But it’s proven so valuable that it’s now becoming expected to do these types of flight tests. For LVS, those rocket flights were the capstone of our technology development effort.”

With the technology accepted for Mars 2020, the mission team began to build the final version of LVS that would fly on Perseverance. In 2019, a copy of that system flew on one more helicopter demonstration in Death Valley, California, facilitated by NASA’s Technology Demonstration Missions program. The helicopter flight provided a final check on over six-years of multiple field tests.

But Mohan pointed out that even with these successful demonstrations, there will be more work to do to ensure a safe landing. She’ll be at Mission Control for the landing, monitoring the health of the system every step of the way.

“Real life can always throw you curve balls. So, we’ll be monitoring everything during the cruise phase, checking power to the camera, making sure the data is flowing as expected,” Mohan said. “And once we get that signal from the rover that says, ‘I’ve landed and I’m on stable ground,’ then we can celebrate.”

Also under the umbrella of STMD, the program is based at NASA’s Marshall Space Flight Center in Huntsville, Alabama. The program bridges the gap between scientific and engineering challenges and the technological innovations needed to overcome them, enabling robust new space missions.