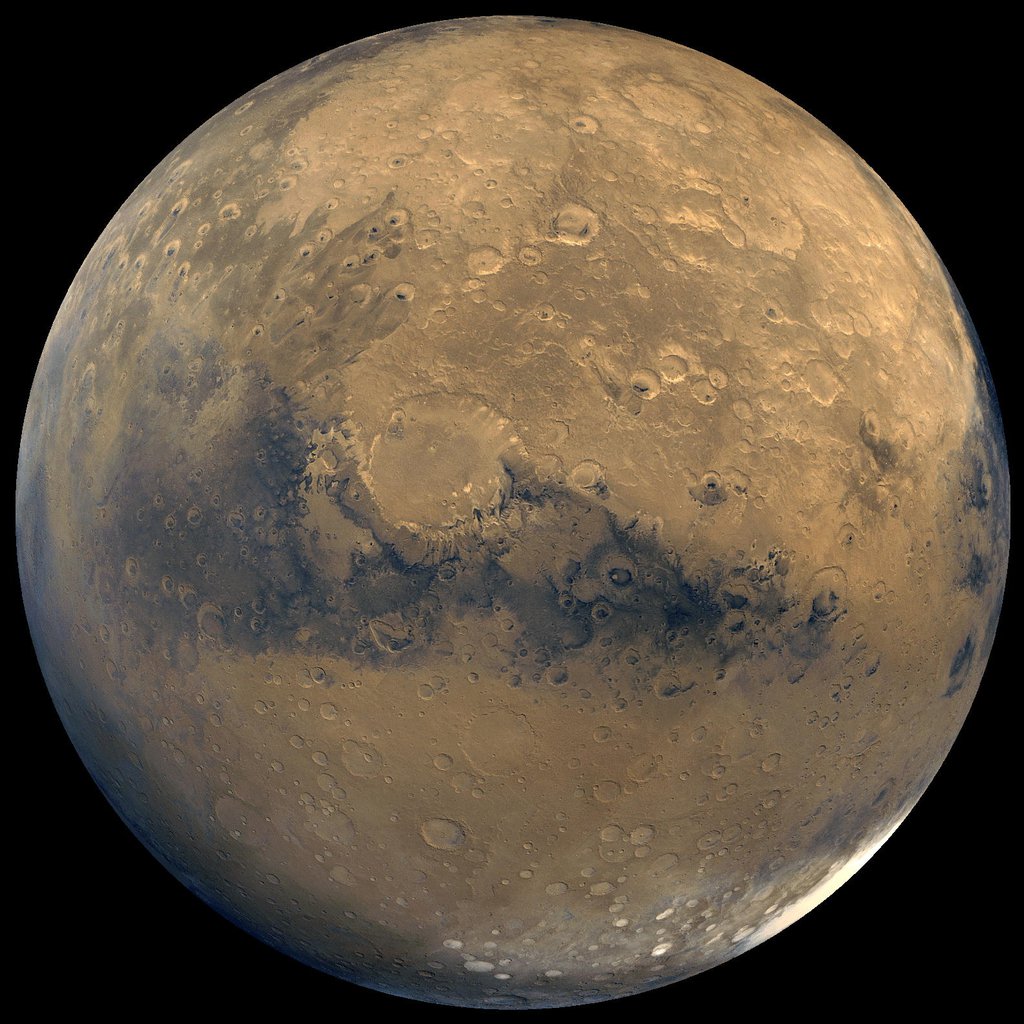 This global view of Mars is composed of about 100 Viking Orbiter images.

The new science results indicate that a large quantity of the Red Planet’s water is trapped in its crust rather than having escaped into space.

Billions of years ago, according to geological evidence, abundant water flowed across Mars and collected into pools, lakes, and deep oceans. New NASA-funded research shows a substantial quantity of its water – between 30 and 99% – is trapped within minerals in the planet’s crust, challenging the current theory that due to the Red Planet’s low gravity, its water escaped into space.

Early Mars was thought to have enough water to have covered the whole planet in an ocean roughly 100 to 1,500 meters (330 to 4,920 feet) deep – a volume roughly equivalent to half of Earth’s Atlantic Ocean. While some of this water undeniably disappeared from Mars via atmospheric escape, the new findings, published in the latest issue of Science, conclude it does not account for most of its water loss.

“Atmospheric escape doesn’t fully explain the data that we have for how much water actually once existed on Mars,” said Scheller.

Using a wealth of cross-mission data archived in NASA’s Planetary Data System (PDS), the research team integrated data from multiple NASA Mars Exploration Program missions and meteorite lab work. Specifically, the team studied the quantity of water on the Red Planet over time in all its forms (vapor, liquid, and ice) and the chemical composition of the planet’s current atmosphere and crust, looking in particular at the ratio of deuterium to hydrogen (D/H).

While water is made up of hydrogen and oxygen, not all hydrogen atoms are created equal. The vast majority of hydrogen atoms have just one proton within the atomic nucleus, while a tiny fraction (about 0.02%) exists as deuterium, or so-called “heavy” hydrogen, which has a proton and a neutron. The lighter-weight hydrogen escapes the planet’s gravity into space much easier than its denser counterpart. Because of this, the loss of a planet’s water via the upper atmosphere would leave a revealing sign on the ratio of deuterium to hydrogen in the planet’s atmosphere: There would be a very large amount of deuterium left behind.

When water interacts with rock, chemical weathering forms clays and other hydrous minerals that contain water as part of their mineral structure. This process occurs on Earth as well as on Mars. On Earth, old crust continually melts into the mantle and forms new crust at plate boundaries, recycling water and other molecules back into the atmosphere through volcanism. Mars, however, has no tectonic plates, and so the “drying” of the surface, once it occurs, is permanent.

“The hydrated materials on our own planet are being continually recycled through plate tectonics,” said Michael Meyer, lead scientist for NASA’s Mars Exploration Program at the agency’s headquarters in Washington. “Because we have measurements from multiple spacecraft, we can see that Mars doesn’t recycle, and so water is now locked up in the crust or been lost to space.”

A key objective of NASA’s Mars 2020 Perseverance rover mission on Mars is astrobiology, including the search for signs of ancient microbial life. The rover will characterize the planet’s geology and past climate, pave the way for human exploration of the Red Planet, and be the first mission to collect and cache Martian rock and regolith (broken rock and dust). Scheller and Ehlmann will aid in operations by the Perseverance rover to collect these samples that will be returned to Earth through the Mars Sample Return program, which will allow the highly-anticipated further examination of these hypotheses about the drivers of Mars climate change. Understanding the evolution of the Martian environment is important context for understanding results from analyses of the returned samples as well as understanding how habitability changes over time on rocky planets.

The research and findings outlined in the paper highlight the significant contributions of early career scientists in expanding our understanding of the solar system. Similarly, the research, which relied on data from meteorites, telescopes, satellite observations, and samples analyzed by rovers on Mars, illustrates the importance of having multiple ways of probing the Red Planet.