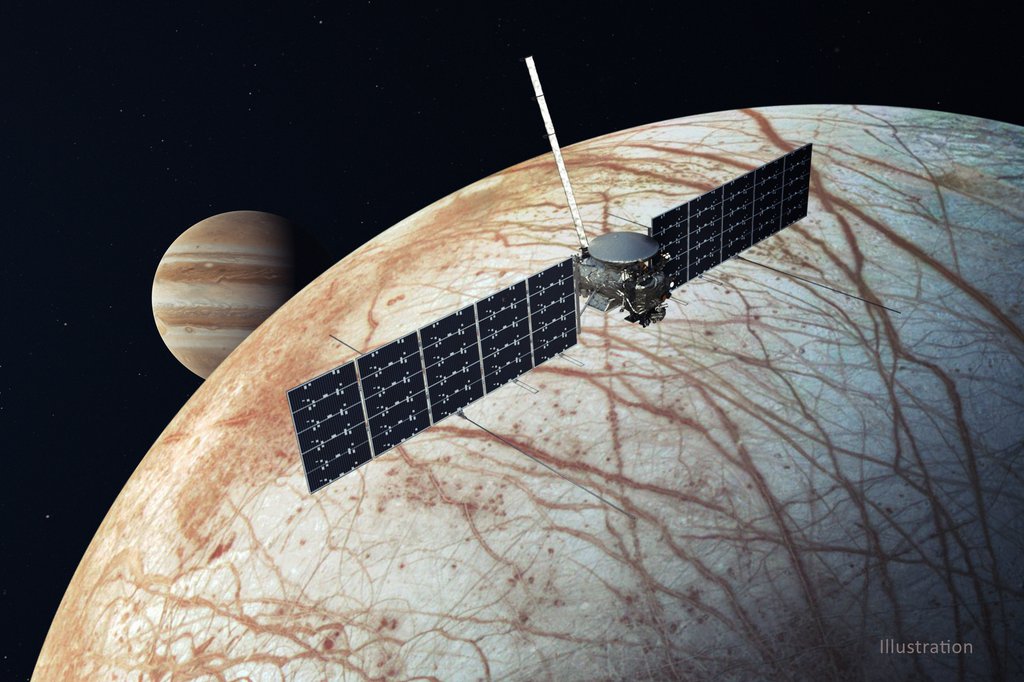 NASA's Europa Clipper, depicted in this illustration that was updated in December 2020, will swoop around Jupiter on an elliptical path, dipping close to its moon Europa on each flyby to collect data. 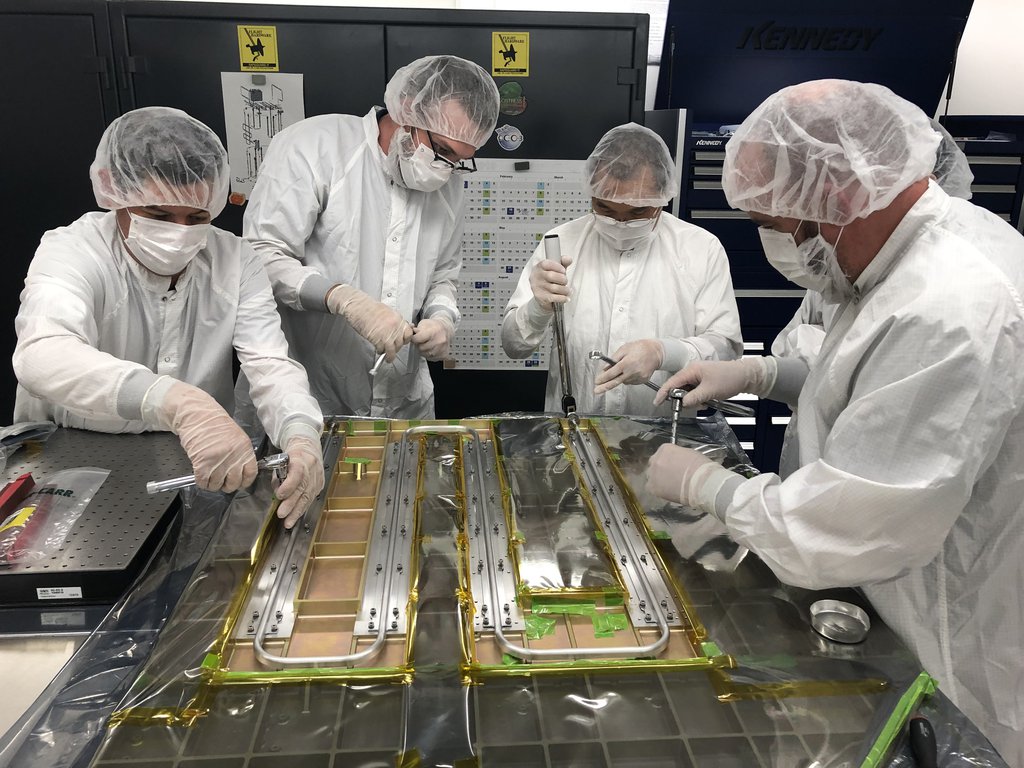 Technicians and engineers at NASA's Jet Propulsion Laboratory work together on Sept. 12, 2019, to bond thermal tubing to a panel built for NASA's Europa Clipper spacecraft by the Johns Hopkins University Applied Physics Laboratory (APL). The tubing controls the orbiter’s temperature as it travels. 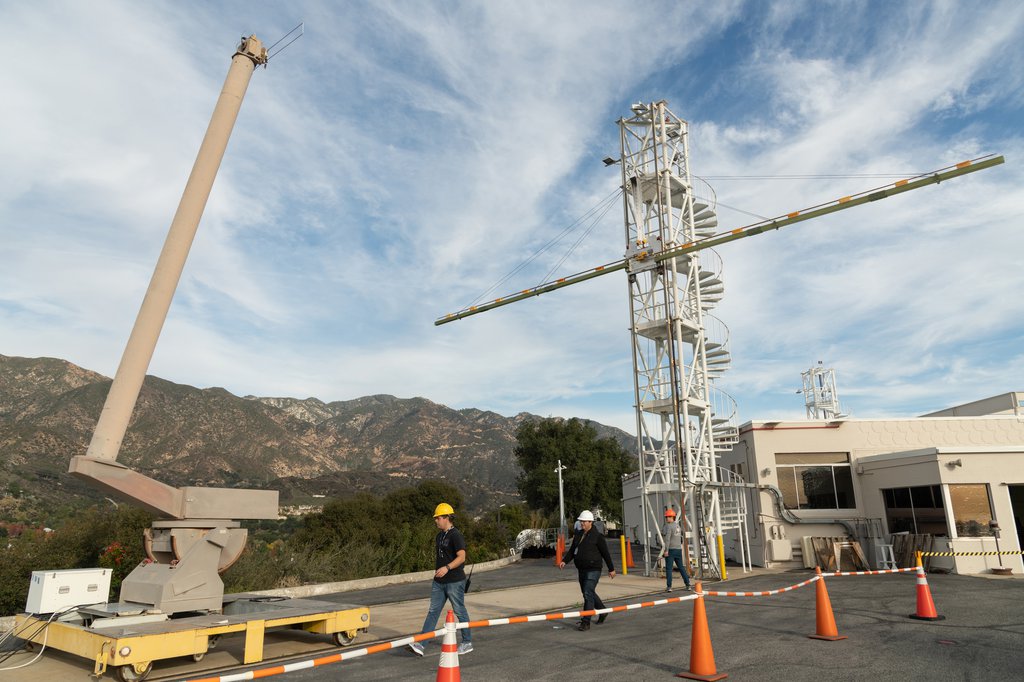 Engineers at NASA's Jet Propulsion Laboratory test an engineering model of a high-frequency (HF) radar antenna that makes up part of NASA's Europa Clipper radar instrument on Dec. 17, 2019. The 59-foot-long (18-meter-long) antenna is held straight by a cross bar on the tower at right. 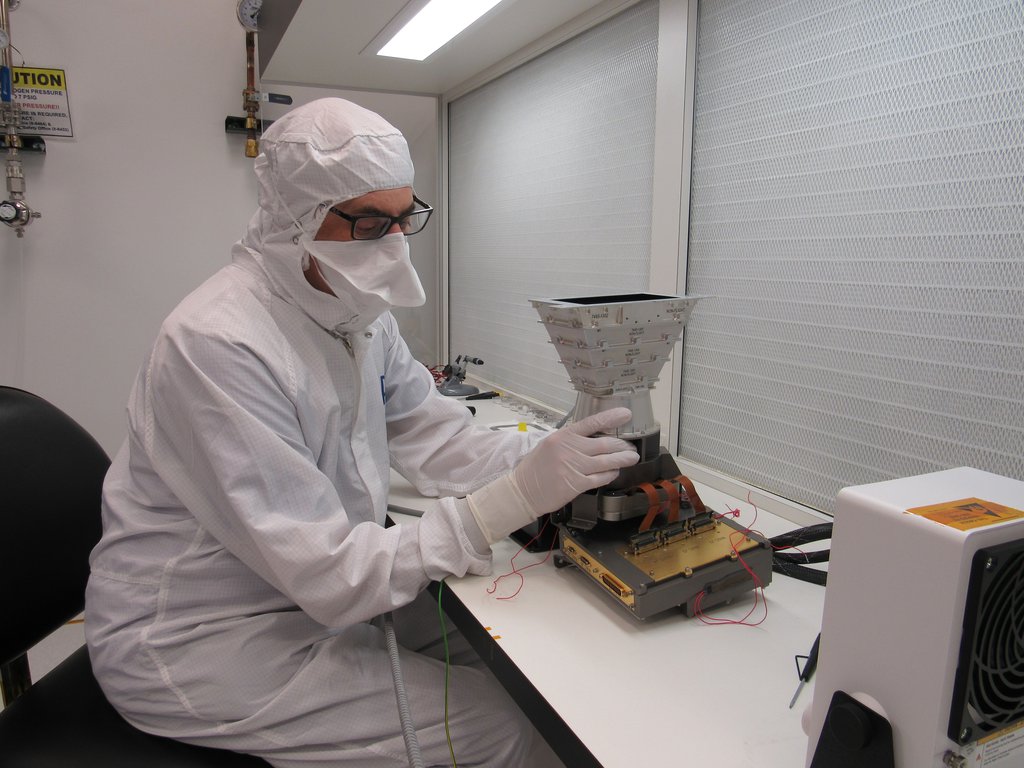 An engineer at the Johns Hopkins Applied Physics Laboratory (APL) works with an engineering model – used for testing on Earth – of part of the Europa Imaging System (EIS) that will fly aboard NASA's Europa Clipper. He the installed detector electronics of the instrument's Wide Angle Camera (WAC).

Jupiter’s moon Europa may have the potential to harbor life. The spacecraft will use multiple flybys of the moon to investigate the habitability of this ocean world.

Europa Clipper, NASA’s upcoming flagship mission to the outer solar system, has passed a significant milestone, completing its Critical Design Review. During the review, experts examined the detailed design of the spacecraft to ensure that it is ready to complete construction. The mission is now able to complete hardware fabrication and testing, and move toward the assembly and testing of the spacecraft and its payload of sophisticated science instruments.

With an internal global ocean twice the size of Earth’s oceans combined, Jupiter’s moon Europa carries the potential for conditions suitable for life. But the frigid temperatures and the nonstop pummeling of the surface from Jupiter’s radiation make it a tricky target to explore: Mission engineers and scientists must design a spacecraft hardy enough to withstand the radiation yet sensitive enough to gather the science needed to investigate Europa’s environment.

The Europa Clipper orbiter will swoop around Jupiter on an elliptical path, dipping close to the moon on each flyby to conduct detailed reconnaissance. The science includes gathering measurements of the internal ocean, mapping the surface composition and its geology, and hunting for plumes of water vapor that may be venting from the icy crust.

Development of the spacecraft is progressing well, based on the intense examination NASA recently completed. The Critical Design Review conducted a deep dive into the specifics of the plans for all of the science instruments – from cameras to antennas – and flight subsystems, including propulsion, power, avionics, and the flight computer.

“We showed that our project system design is strong,” said Europa Clipper Project Manager Jan Chodas of NASA’s Jet Propulsion Laboratory in Southern California. “Our plans for completing the development and integration of the individual pieces hold together, and the system as a whole will function as designed to gather the science measurements we need to explore the potential habitability of Europa.”

Hardware in the Works

The most striking of Europa Clipper’s features, its signature elements, are taking shape. Nearly 10 feet (3 meters) in diameter, the disc-shaped high-gain antenna, which will receive commands from Earth and transmit science data back down, is in its final stage of assembly. And by far the most visible of Europa Clipper’s hardware – the massive solar arrays that will unfurl in deep space like wings – are under construction as well. The spacecraft, with its arrays fully deployed, is wider than a basketball court is long, spanning 100 feet (30.5 meters). The arrays will cover over 960 square feet (90 square meters).

They will be attached to the propulsion module being built by the Johns Hopkins Applied Physics Lab (APL) in Laurel, Maryland. The propulsion module core consists of two stacked cylinders that together stand almost 10 feet (3 meters) high and hold the propulsion tanks and 16 rocket engines that will propel Europa Clipper once it leaves Earth’s atmosphere. 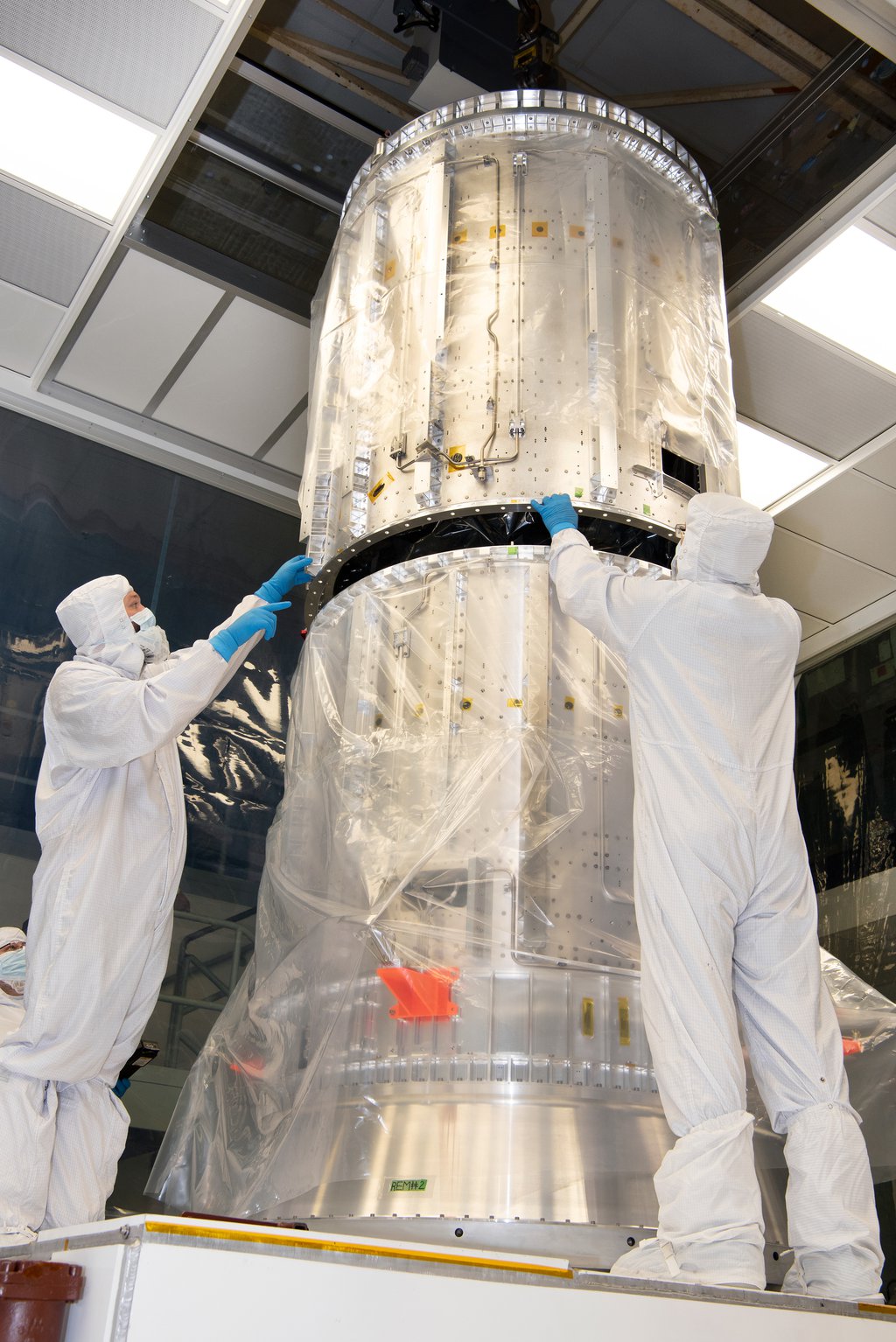 The giant cylinders embody the cooperative effort needed to put a spacecraft like this together. They were built by APL and shipped to JPL for installation of the Heat Redistribution System tubing, part of a system that will keep the spacecraft thermally controlled. The cylinders were then sent to NASA’s Goddard Space Flight Center in Greenbelt, Maryland, for installation of the propulsion subsystem. There are 400 welded connections, each of them X-rayed for quality control, which are key to successfully installing the propulsion subsystem.

APL is also building the telecommunications module for radio communications with Earth and a radiation monitor to gauge the size of the electron blast that is hitting the spacecraft during its 40-plus flybys of Europa.

At JPL, construction is underway on several elements of the flight system, including the protective vault that shields critical electronic hardware from Jupiter’s intense radiation. JPL is also building and testing the avionics subsystem, which includes the flight computer, the power switching and distribution hardware, the flight software needed to perform the science mission, and the ground system tools necessary to fly the mission. Also being built is ground support equipment that will be used to assemble and test Europa Clipper’s large pieces of flight hardware.

“It’s a very exciting time for the team, seeing the fruits of their work that will be orbiting Jupiter in a few years,” said Europa Clipper Deputy Project Manager Jordan Evans of JPL. “Even in the face of COVID-19, the team is firing on all cylinders. Using safe-at-work protocols, they’re performing the necessary work on the hardware while the rest of the team is getting their job done at home.”

Scientists are especially interested in what makes up the moon’s surface. Evidence suggests that material exposed there has been mixed through the icy crust and perhaps comes from the ocean beneath. Europa Clipper will also investigate the moon’s gravity field, which will tell scientists more about both how the moon flexes as Jupiter pulls on it and how that action could potentially warm the internal ocean.

“We’re doing work that a decade from now will change how we think about the diversity of worlds in the outer solar system – and about where life might be able to exist right now, not in the distant past,” said Europa Clipper Project Scientist Robert Pappalardo of JPL.

But the more instruments a spacecraft carries, the more they interact and potentially affect each other’s operation. To that end, noted Pappalardo, “We’re currently making sure the instruments can all operate at the same time without electromagnetic interference.”

The full suite of instruments will undergo extensive testing after they arrive at JPL in 2021. Early 2022 marks the start of assembly, test, and launch operations. The countdown is on.

“Less than a year to go until all the hardware assemblies need to show up in one place,” Chodas said. “We bring all these pieces together to start building up the full flight system, then test the fully integrated spacecraft and get it ready to launch.”

The team is on track to have Europa Clipper ready for a launch in 2024.

Missions such as Europa Clipper help contribute to the field of astrobiology, the interdisciplinary research on the variables and conditions of distant worlds that could harbor life as we know it. While Europa Clipper is not a life-detection mission, it will conduct detailed reconnaissance of Europa and investigate whether the icy moon, with its subsurface ocean, has the capability to support life. Understanding Europa’s habitability will help scientists better understand how life developed on Earth and the potential for finding life beyond our planet.

More information about Europa Clipper’s hardware and instruments, including new photos, can be found here: