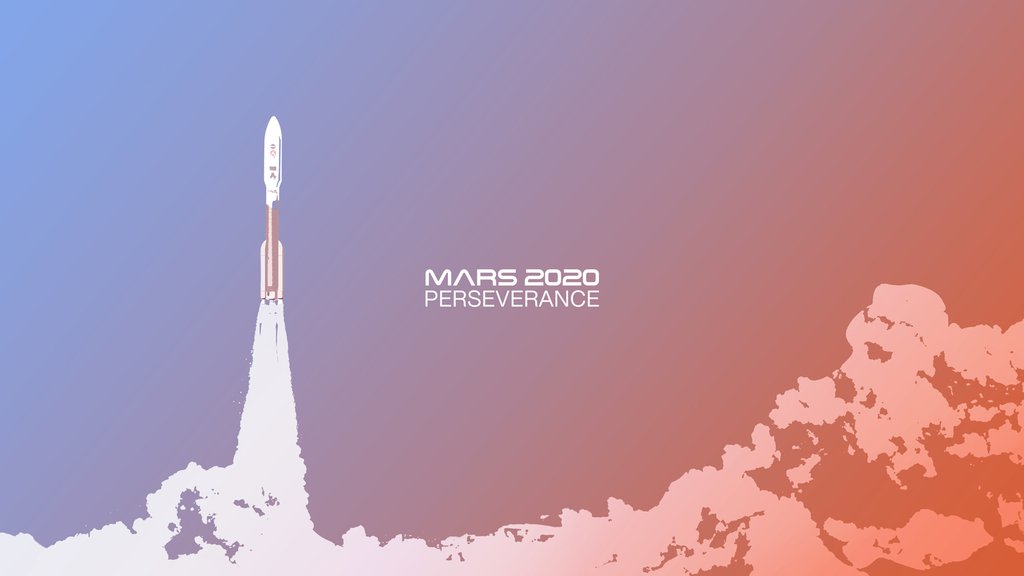 This illustration shows the moment after liftoff of the Mars 2020 Perseverance rover from Cape Canaveral, Florida. The spacecraft begins the first part of its journey to Mars atop a United Launch Alliance Atlas V launch vehicle. More information about the mission is at: https://mars.nasa.gov/mars2020/.

NASA is inviting the public to take part in virtual activities and events ahead of the launch of the agency's Mars 2020 Perseverance rover, which is targeted for 7:50 a.m. EDT (4:50 a.m. PDT) Thursday, July 30, on a United Launch Alliance Atlas V rocket from Space Launch Complex 41 at Cape Canaveral Air Force Station in Florida.

Live coverage and countdown commentary will begin at 7 a.m. EDT (4 a.m. PDT) on NASA Television and the agency's website, as well as YouTube, Twitter, Facebook, LinkedIn, Twitch, Daily Motion, and Theta.TV. As part of the broadcast, Grammy Award-winning singer and songwriter Gregory Porter will perform a special rendition of "America the Beautiful."

Perseverance is NASA's latest Red Planet rover, designed to search for astrobiological evidence of ancient microbial life on Mars. Following a seven-month journey, it will land at Jezero Crater on Feb. 18, 2021. There, Perseverance will gather rock and soil samples for future return to Earth. It also will characterize the planet's climate and geology and pave the way for human exploration of the Red Planet. The robotic scientist, which weighs just under 2,300 pounds (1,043 kilograms), also will carry the Ingenuity Mars Helicopter, a technology demonstration that marks the first attempt at powered, controlled flight on another planet.

Members of the public can attend the launch virtually, receiving mission updates and opportunities normally received by on-site guests. NASA's virtual launch experience for Mars 2020 Perseverance rover includes: a behind-the-scenes look at the mission; augmented reality filters; access to an engaging NASA social community; an invitation to submit videos to be part of the televised launch broadcast; toolkits for students; a chance to take a souvenir photo in our Mars Photo Booth; and the opportunity to send your name to Mars!

"More than 112,000 people registered to be our virtual guests for NASA's SpaceX Demo-2 test flight launch in May, which was the first time the agency had offered this type of launch experience to the public," said NASA Associate Administrator for Communications Bettina Inclán. "For our Mars 2020 Perseverance rover launch, we hope even more people will join us as we #CountdownToMars!"

To participate, members of the public can register to stay up to date on mission information, mission highlights, and interaction opportunities. To find out more, visit:

Members of the public also can share in the journey through a variety of activities, including:

NASA will host a global "NASA Social," an opportunity for social media users to get a behind-the-scenes view of the Perseverance launch. The NASA Social will be held virtually via a public Facebook group, so people of all ages from all over the world can request permission to join us for a behind-the-scenes look at the mission. Registration is open on Facebook. All social applications will be considered on a case-by-case basis. Live opportunities will begin one day prior to the launch date. Learn more at:

When Perseverance launches to Mars, it will carry three dime-size chips with 10.9 million names submitted by people all over the world. Those who already submitted their names can get a special "Now Boarding" stamp on their boarding passes and anyone can sign up to send their name on a future Mars mission at:

Be a part of the countdown to by recording a launch countdown video clip and tagging it on social media using #CountdownToMars. Selected clips will be featured on NASA social media or even on launch day during NASA's launch coverage. Learn more at:

This interactive booklet is packed with info about the Mars 2020 Perseverance rover launch and all the print products for the mission. Flip through the interactive packet, or download a PDF version.

While sharing the Mars launch with friends and family, take a souvenir photo with NASA's virtual Mars Photo Booth. You can pose next to the mighty Atlas V rocket that will launch the Mars 2020 Perseverance rover, strike a pose on the Red Planet, or put yourself next to the rover in the clean room at NASA's Jet Propulsion Laboratory in Southern California, where the rover was assembled. Just upload your favorite picture, choose a background, and download the new image:

Virtually join our #CountdownToMars with our new Facebook and Instagram Augmented Reality Filters. Take a virtual trip to Mars with the immersive Put Yourself on Mars filter, give the official countdown to launch as a flight director with the Mission Control filter, or bring the mission to any environment with the Mars Rover 3D filter.

Get a Front Row Seat

Get a free front row seat to the #CountdownToMars launch broadcast with Oculus virtual reality technology on Facebook.

Explore the intricate features of Perseverance with this interactive 3D feature that lets you zoom, rotate, and mouse over the rover to learn about its various components:

Activities and Lessons for Students

Launch rockets, build robots, and explore worlds beyond our own! This collection of projects, toolkit and contests will take you into space without ever leaving Earth:

In addition, a variety of Mars-themed lessons are available from JPL's education website:

Bring the exciting engineering and science of this mission to students in the classroom and at home with STEM lessons and do-it-yourself projects covering topics such as biology, geology, physics, mathematics, engineering, coding and language arts.

Experts from NASA, United Launch Alliance (ULA), the Department of Energy (DOE), and more will answer public questions about the mission in a Reddit Ask Me Anything on Monday, July 27, at 4:30 p.m. EDT (1:30 p.m. PDT). For updates, check back regularly at:

In addition to social media coverage, NASA Television will air a number of events leading up to, including, and following the launch. Coverage of the launch begins at 7 a.m. EDT (4 a.m. PDT) Thursday, July 30.

For more about America's Moon to Mars exploration approach, visit: