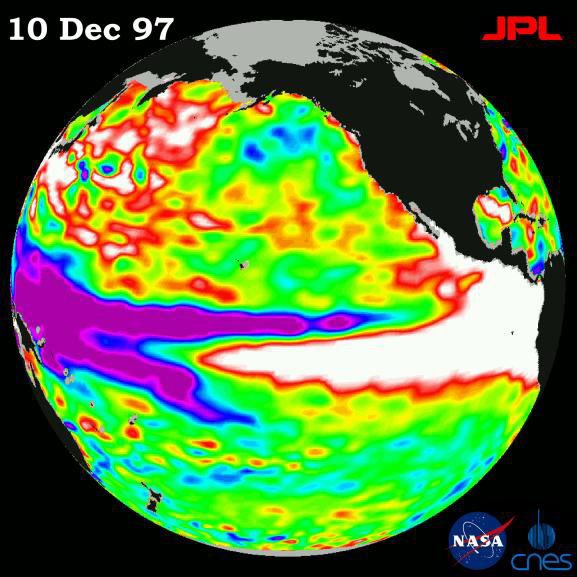 Simultaneous ocean measurements taken by two orbiting NASA science instruments suggest that another weather-disrupting El Niño condition may be developing in the Pacific Ocean, with the potential of altering global weather patterns next winter.

Simultaneous ocean measurements taken by two orbiting NASA science instruments suggest that another weather-disrupting El Niño condition may be developing in the Pacific Ocean, with the potential of altering global weather patterns next winter.

Sea-surface height measurements taken by the radar altimeter onboard the joint U.S.-French TOPEX/POSEIDON satellite and wind data collected by the NASA Scatterometer on Japan's Advanced Earth Observing Satellite (ADEOS) are being used together for the first time to diagnose changing oceanographic and atmospheric conditions in the tropical Pacific Ocean.

The El Niño phenomenon is thought to be triggered when steady westward blowing trade winds weaken and even reverse direction. This change in the winds allows the large mass of warm water that is normally located near Australia to move eastward along the equator until it reaches the coast of South America. This displaced pool of unusually warm water affects where rain clouds form and, consequently, alters the typical atmospheric jet stream patterns around the world. The change in the wind strength and direction also impacts global weather patterns.

"NSCAT has observed two episodes of the reversal of the trade winds in the western Pacific, one at the end of December and one at the end of February. Both generated warm water masses, called Kelvin waves, that traveled across the Pacific and were measured by TOPEX/Poseidon," said Dr. Lee-Lueng Fu, TOPEX/Poseidon project scientist at NASA's Jet Propulsion Laboratory, Pasadena, CA. "Kelvin waves are often a precursor to a warm state of the tropical Pacific, sometimes leading to an El Niño.

"Whether an El Niño event will occur cannot be determined by just examining the satellite data," Fu continued. "A computer model that couples ocean-atmosphere data, like the one used by the National Oceanographic and Atmospheric Administration (NOAA), is a necessary tool to issue scientifically based predictions. Now, for the first time, both TOPEX/POSEIDON and NSCAT are observing and providing the best, near real-time view of global ocean winds and sea level ever obtained. These observations will help NOAA's model to predict the occurrence of El Niño."

NOAA has issued an advisory regarding the presence of the early indications of El Niño conditions. A number of El Niño forecast activities supported by NOAA indicate the likelihood of a moderate or strong El Niño in late 1997. The forecast model operated at NOAA's National Centers for Environmental Prediction (NCEP) used data collected by the TOPEX/POSEIDON satellite.

"The use of TOPEX/POSEIDON data clearly improved our forecast for the winter of 1996-1997," said Dr. Ants Leetmaa, chief scientist at NCEP. "We currently use the data continuously for our operational ocean analyses and El Niño forecasts. The use of this data set enabled a clearer picture to be developed of the multi-year evolution of ocean conditions in the tropical Pacific that have resulted in the onset of the current warm episode. We have not yet had a chance to utilize the NSCAT data in the models but we anticipate that its use will also improve our forecast system."

"Since the beginning of the instrument's operation in September 1996, NSCAT has observed stronger than normal easterly winds in the central and western tropical Pacific, which might have piled up warm water in the west as indicated by the higher than normal sea level and sea surface temperature," said Dr. W. Timothy Liu, NSCAT project scientist at JPL. "This is usually a precursor of subsequent anomalous warming in the east. Kelvin waves moving across the Pacific do not necessarily mean El Niño, but we are studying how these seasonal phenomena like Kelvin waves are related to events like El Niño that occur over several years. TOPEX/POSEIDON and NSCAT will provide continuous, near real-time observations of the critical developments in the Pacific in the months to come."

The climatic event has been given the name El Niño, a Spanish term for a "boy child," because the warm current first appeared off the coast of South America around Christmas. Past El Niño events have caused unusually heavy rain and flooding in California, unseasonably mild winters in the Eastern United States and severe droughts in Australia, Africa and Indonesia. Better predictions of extreme climate episodes like floods and droughts could save the United States billions of dollars in damage costs. El Niño episodes usually occur approximately every two to seven years.

The TOPEX/POSEIDON satellite uses an altimeter to bounce radar signals off the ocean's surface to get precise measurements of the distance between the satellite and the sea surface. These data are combined with measurements from other instruments that pinpoint the satellite's exact location in space. Every 10 days, scientists produce a complete map of global ocean topography, the barely perceptible hills and valleys found on the sea surface. With detailed knowledge of ocean topography, scientist can then calculate the speed and direction of worldwide ocean currents.

The NASA scatterometer uses an array of stick-like antennas that radiate radar pulses in the Ku-band across broad regions of the Earth's surface. The way the radar signal bounces off the ocean's surface allows scientists to calculate both wind speed and direction. At any given time NSCAT's antennas scan two swaths of ocean -- one oneither side of the satellite's near- polar, sun-synchronous 500-mile (800-kilometer) orbit. The scatterometer takes 190,000 wind measurements per day, mapping more than 90 percent of the world's ice-free oceans every two days.

Both the TOPEX/POSEIDON altimeter and the NASA scatterometer are radar instruments which allow them to operate 24 hours a day, collecting data day or night, regardless of sunlight or weather conditions.

The following Internet sites can be accessed for more information: