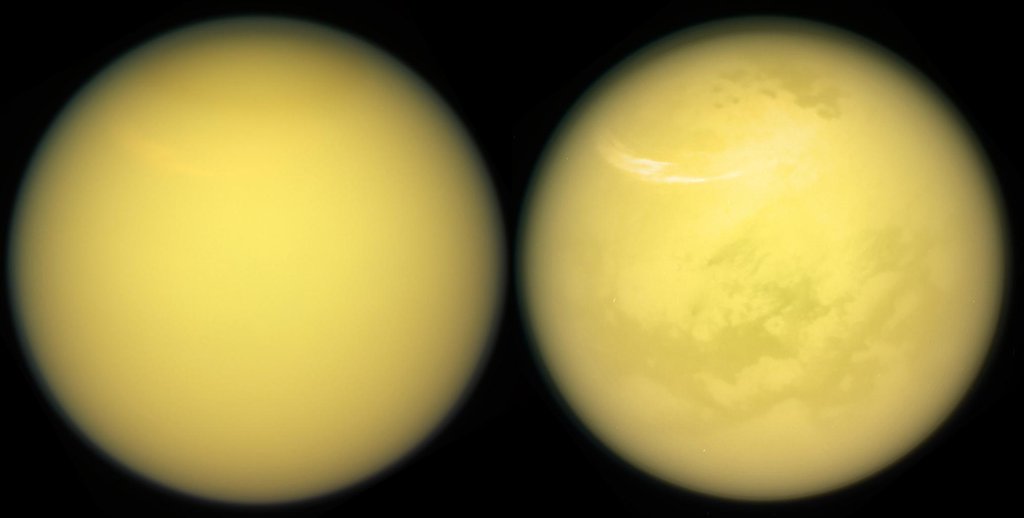 These two views of Saturn's moon Titan exemplify how NASA's Cassini spacecraft has revealed the surface of this fascinating world.

Cassini carried several instruments to pierce the veil of hydrocarbon haze that enshrouds Titan. These include the spacecraft's radar (see PIA20021) and visual and infrared mapping spectrometer, or VIMS (see PIA13400 and PIA18432). The mission's imaging cameras also have several spectral filters sensitive to specific wavelengths of infrared light that are able to make it through the haze to the surface and back into space. These "spectral windows" have enable the imaging cameras to map nearly the entire surface of Titan (see PIA19658).

In addition to Titan's surface, images from both the imaging cameras and VIMS have provided windows into the moon's ever-changing atmosphere, chronicling the appearance and movement of hazes and clouds over the years. A large, bright and feathery band of summer clouds can be seen arcing across high northern latitudes in the view at right.

These views were obtained with the Cassini spacecraft narrow-angle camera on March 21, 2017. Images taken using red, green and blue spectral filters were combined to create the natural-color view at left. The false-color view at right was made by substituting an infrared image (centered at 938 nanometers) for the red color channel.

The views were acquired at a distance of approximately 613,000 miles (986,000 kilometers) from Titan. Image scale is about 4 miles (6 kilometers) per pixel.