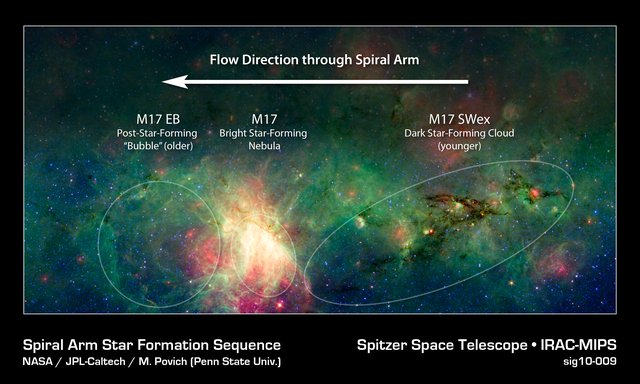 A dragon-shaped cloud of dust seems to fly out from a bright explosion in this infrared light image from the Spitzer Space Telescope.

These views have revealed that this dark cloud, called M17 SWex, is forming stars at a furious rate but has not yet spawned the most massive type of stars, known as O stars. Such stellar behemoths, however, light up the M17 nebula at the image's center and have also blown a huge "bubble" in the gas and dust that forms M17's luminous left edge.

The stars and gas in this region are now passing though the Sagittarius spiral arm of the Milky Way (moving from right to left), touching off a galactic "domino effect." The youngest episode of star formation is playing out inside the dusty dragon as it enters the spiral arm. Over time this area will flare up like the bright M17 nebula to the left of the dragon, glowing in the light of young, massive stars. The remnants of an older burst of star formation blew the bubble in the region to the far left, called M17 EB.