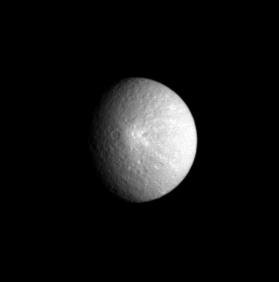 Saturn's moon Rhea displays one of its more prominent features here: a bright, rayed crater which was seen at much higher resolution in an image taken two weeks earlier. Rhea is 1,528 kilometers (949 miles) across.

North on Rhea is up and rotated about 65 degrees to the left. This view shows principally the anti-Saturn hemisphere on Rhea.

The image was taken in visible light with the Cassini spacecraft narrow-angle camera on April 27, 2005, at a distance of approximately 2 million kilometers (1.3 million miles) from Rhea and at a Sun-Rhea-spacecraft, or phase, angle of 42 degrees. The image scale is 12 kilometers (7 miles) per pixel.