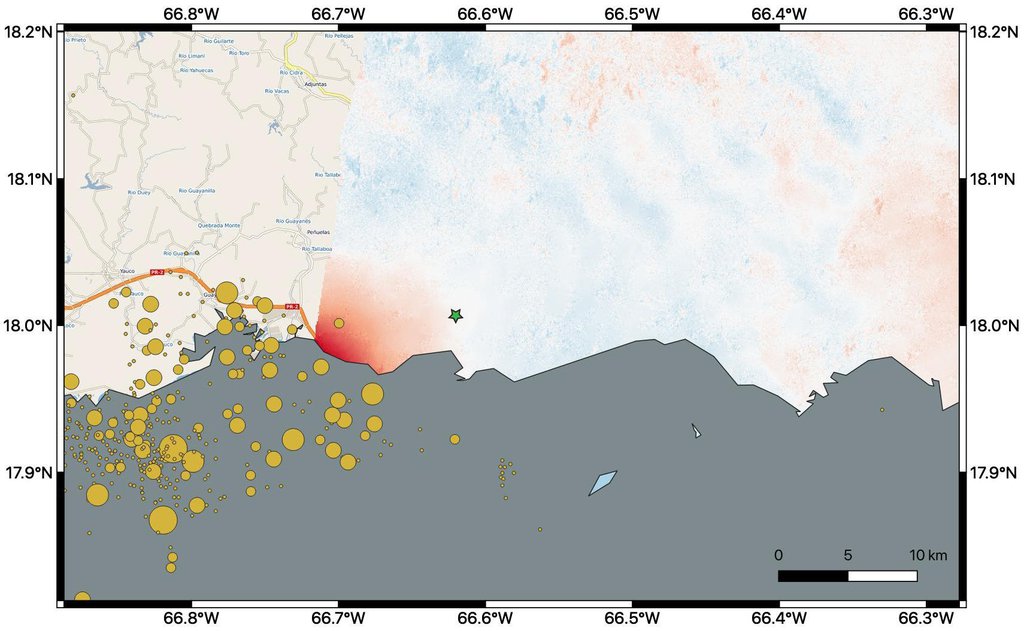 By comparing interferometric synthetic aperture radar (InSAR) data acquired on Jan. 9, 2020, with data acquired on Dec. 28, 2019, from the Copernicus Sentinel-1A satellite, NASA scientists were able to map where, how much and in what direction the ground shifted following a 6.4-magnitude earthquake off the coast of Puerto Rico.

Managed by the European Space Agency (ESA), the Copernicus Sentinel-1A satellite was able to see the eastern two-thirds of the island during the Jan. 9 flyover. On the map, red indicates areas where the ground was changed, or displaced, with darker shades corresponding to more significant displacement. The scientists found that the greatest displacement from the flyover area occurred west of the city of Ponce (identified by the green star), not far from the quake's offshore epicenter. They recorded up to 5.5 inches (14 centimeters) of ground change there. The ground appeared to shift downward and slightly to the west.

The epicenter of the quake and the cluster of quakes and aftershocks in the region identified by the United States Geological Survey (shown as orange circles) fall just west of the satellite's Jan. 9 track. Because of this, scientists also plan to analyze data from Sentinel-1A's forthcoming Jan. 14 flyover, which will include western Puerto Rico.

The NASA Earth Applied Sciences Disasters Program has activated Tier 1 response in support of this disaster, and is in contact with the Federal Emergency Management Agency, the United States Geological Survey and Health and Human Services to provide NASA Earth-observing data in support of response and recovery efforts.