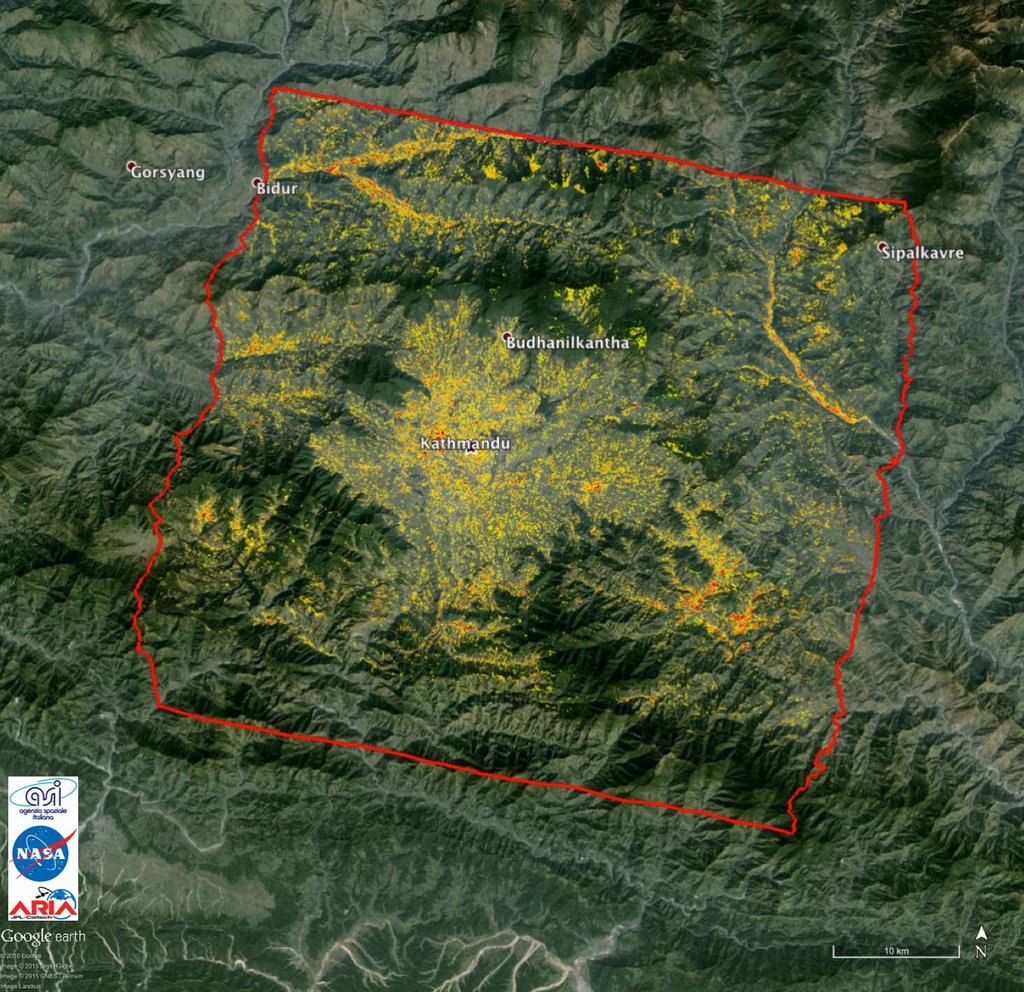 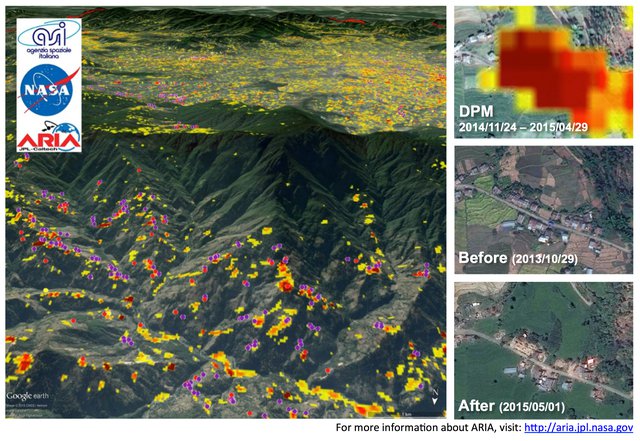 NASA data and expertise are providing valuable information for the ongoing response to the April 25, 2015, magnitude 7.8 Gorkha earthquake in Nepal. The quake has caused significant regional damage and a humanitarian crisis. It was the strongest earthquake to occur in that vicinity since a magnitude 8.0 quake there in 1934 that caused more than 10,000 fatalities.

To assist in the disaster response efforts, scientists at NASA's Jet Propulsion Laboratory, Pasadena, California, and California Institute of Technology in Pasadena, in collaboration with the Italian Space Agency (ASI), generated this image of the earthquake's hardest-hit region.

The 25-by-31 mile (40-by-50 kilometer) Damage Proxy Map (DPM), which covers the region around Kathmandu, was processed by the Advanced Rapid Imaging and Analysis (ARIA) team at JPL and Caltech using X-band interferometric synthetic aperture radar data from ASI's COSMO-SkyMed satellite constellation. The technique uses a prototype algorithm to rapidly detect surface changes caused by natural or human-produced damage. The assessment technique is most sensitive to destruction of the built environment. When the radar images areas with little to no destruction, its image pixels are transparent. Increased opacity of the radar image pixels reflects damage, with areas in red reflecting the heaviest damage to cities and towns. The color variations from yellow to red indicate increasingly more significant ground surface change. The time span of the data for the change is Nov. 24, 2014 to April 29, 2015. Each pixel in the damage proxy map is about 100 feet (30 meters) across.

The perspective image (Figure 1) shows the DPM overlaid on the terrain with the locations of damaged buildings identified by the National Geospatial-Intelligence Agency (NGA) preliminary damage assessment, indicated by the red and purple dots. As an example, the images on the side show how red regions in the DPM correlate with damaged buildings, as shown by the collapsed structures in the "after" image. The base map images were provided by Google. Before and after images were provided by DigitalGlobe.

ARIA is a JPL- and NASA-funded project being developed by JPL and Caltech. It is building an automated system for providing rapid and reliable GPS and satellite data to support the local, national and international hazard monitoring and response communities. Using space-based imagery of disasters, ARIA data products can provide rapid assessments of the geographic region impacted by a disaster, as well as detailed imaging of the locations where damage occurred. COSMO-SkyMed data was made freely available for the disaster response by ASI.