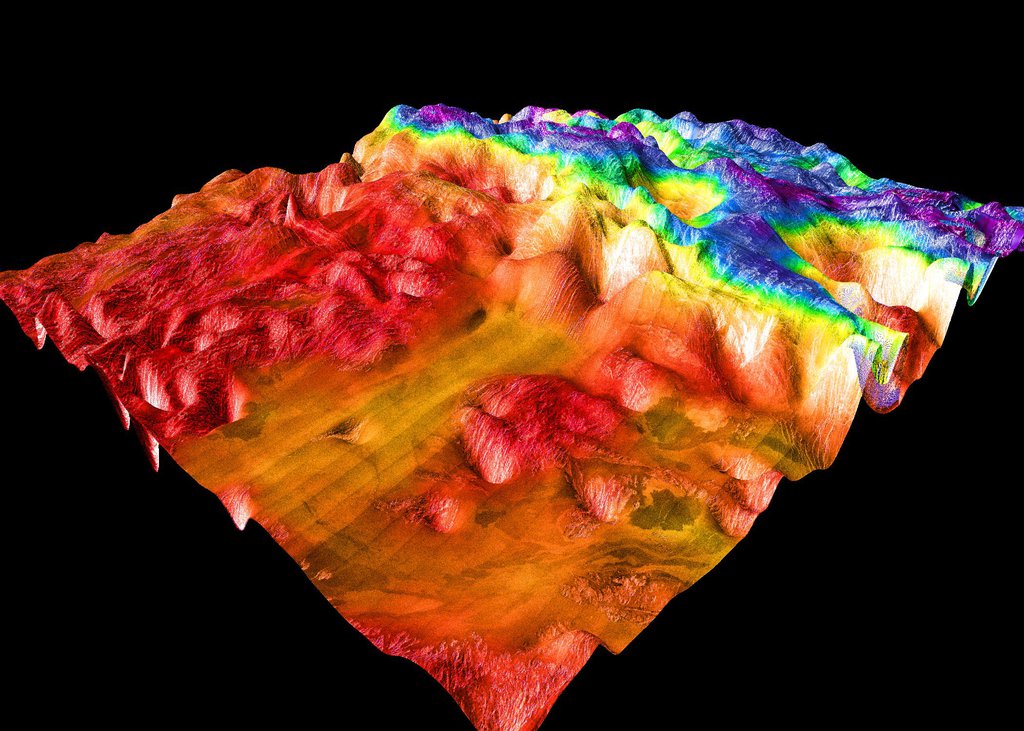 This perspective view of Venus, generated by computer from Magellan data and color-coded with emissivity, shows the boundary between the lowland plains and characteristic Venusian highland terrain in Ovda Regio, the western part of the great equatorial highland called Aphrodite Terra. For a view of the highlands to the west, see PIA00309. PIA00311 shows the more complex highland boundary to the south of this area. The conical "dimples" in the foreground are not real features, but artifacts resulting from erroneous altimeter measurements. Their size gives an idea of the horizontal resolution of the altimeter. The view is perpendicular to the northern boundary of Ovda. Whereas the foreground lowlands are made up of overlapping, relatively dark and unfractured lava flows, the highlands consist mainly of "tessera terrain." The tectonic pattern of the tesserae in this image is of intermediate complexity, consisting of east-west trending ridges cut by north-south fractures. Isolated areas in the lowlands (between the smoothest lava flows) contain similarly trending fractures and may be islands of tessera terrain. Magellan MIDR quadrangle* containing this image: C1-00N129. Image resolution (m): 225. Size of region shown (E-W x N-S, in km): 1013 x 1013. Range of emissivities from violet to red: 0.41 -- 0.91. Vertical exaggeration: 50. Azimuth of viewpoint (deg clockwise from East): 225. Elevation of viewpoint (km): 500. *Quadrangle name indicates approximate center latitude (N=north, S=south) and center longitude (East).