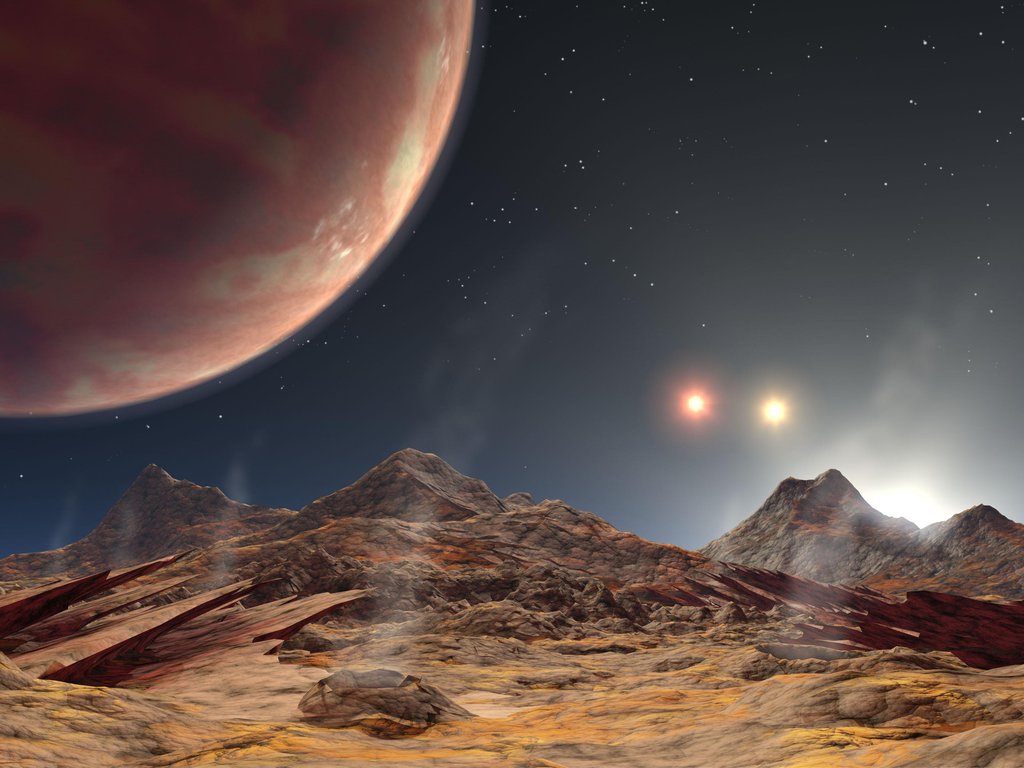 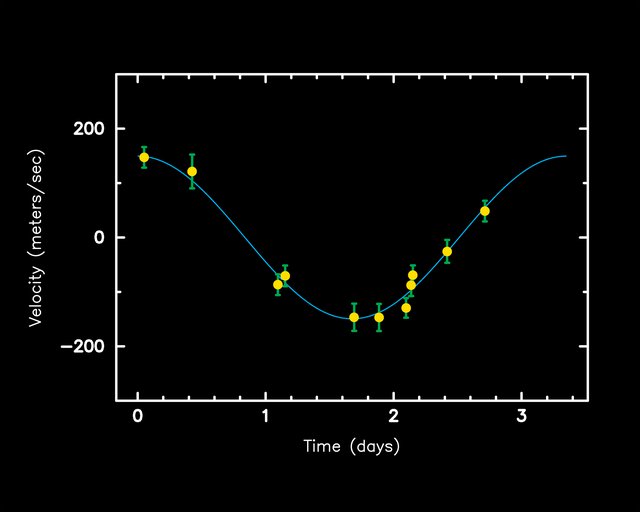 This artist's animation shows the view from a hypothetical moon in orbit around the first known planet to reside in a tight-knit triple-star system. HD 188553 Ab is a gas giant planet, about 1.14 times the mass of Jupiter, with an orbital period of 3.3 days discovered using the Keck I telescope atop Mauna Kea in Hawaii, and zips around a single star that is orbited by a nearby pair of pirouetting stars. Because the stars in this triple system are bunched together, sunsets on the planet -- or on any moons that might exist around the planet -- would be spectacular. This rambunctious stellar family is called HD188753 and is located 149 light-years away in the constellation Cygnus.

In this movie, sunset is seen through the tenuous atmosphere of a hot, baked hypothetical moon. As the suns dip below the horizon, the gas giant comes into view. The moon's landscape remains illuminated by sunlight reflected off the planet. Both the planet and moon would be so hot that even in shadow their surfaces would glow.

The suns' colors and sizes reflect their masses, temperatures and distances to the planet. For example, the first star shown setting over the horizon is the closest, most massive and hottest of the trio, so it is depicted as large and white. The second star is farther away, less massive and cooler than the first, appearing smaller and yellow. The final star is at the same distance as the second, but it is still less massive and cooler, appearing even smaller and orange-red in color. Our Sun is a bit cooler than the hottest star of the system.

The graph in figure 1 shows the "wobble" of a star being tugged on by the planet called HD 188753 Ab. The planet was discovered via the radial velocity technique, in which a planet's presence is inferred by the motion, or wobble, it causes in its parent star. Stellar motion is plotted here as changes in velocity (y-axis) versus time (x-axis).

Unlike most planetary wobbles, this one comes from a star that is circled by a nearby pair of stars. In other words, the planet orbits a single star that is part of a close-knit triple-star system. Because the starlight from this cramped bunch blends together, the task of sifting through the light to find the planet's signature was more difficult. This challenge was overcome with the help of detailed models of the triple-star system's light. Data from those models resulted in precise velocity measurements of the star circled by HD 188753 Ab.