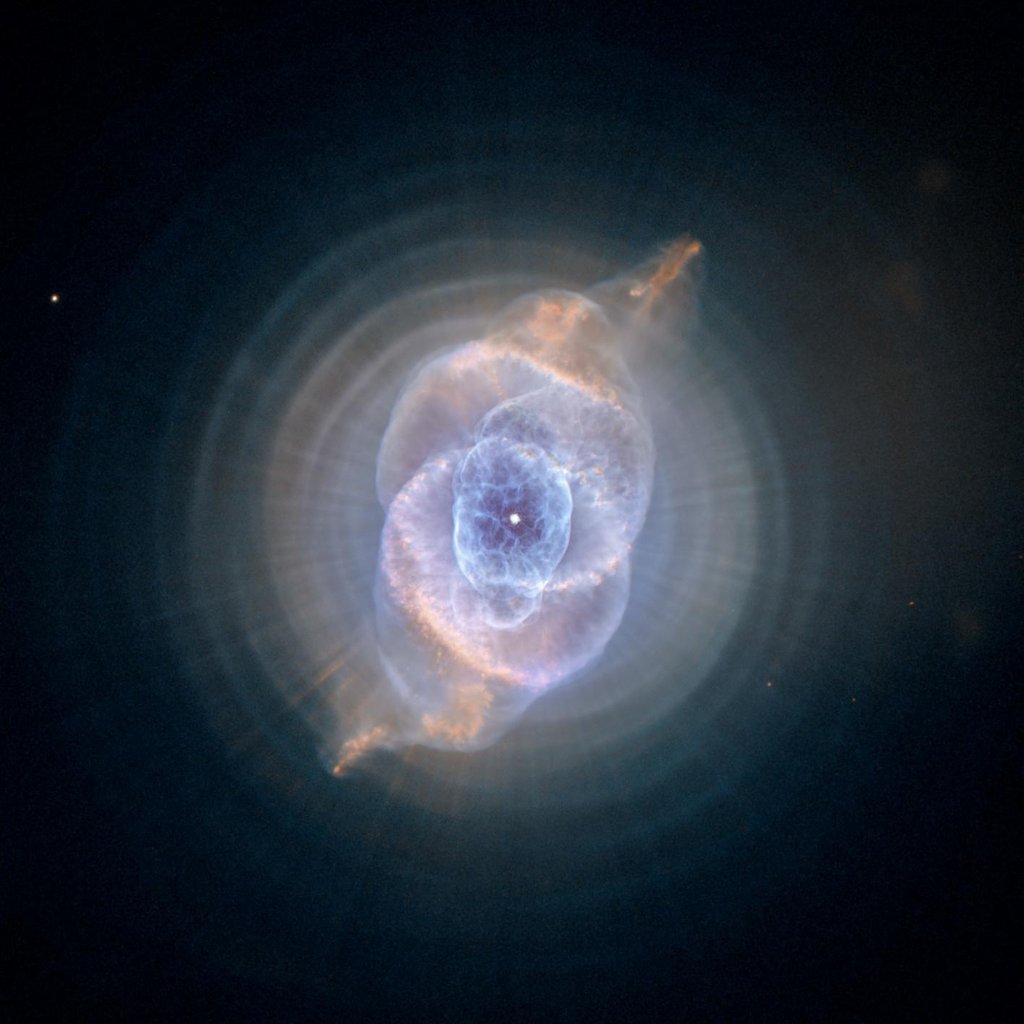 In this detailed view from NASA's Hubble Space Telescope, the so-called Cat's Eye Nebula looks like the penetrating eye of the disembodied sorcerer Sauron from the film adaptation of "The Lord of the Rings."

The nebula, formally cataloged NGC 6543, is every bit as inscrutable as the J.R.R. Tolkien phantom character. Though the Cat's Eye Nebula was one of the first planetary nebulae to be discovered, it is one of the most complex such nebulae seen in space. A planetary nebula forms when Sun-like stars gently eject their outer gaseous layers that form bright nebulae with amazing and confounding shapes.

As if the Cat's Eye itself isn't spectacular enough, this new image taken with Hubble's Advanced Camera for Surveys (ACS) reveals the full beauty of a bull's eye pattern of eleven or even more concentric rings, or shells, around the Cat's Eye. Each 'ring' is actually the edge of a spherical bubble seen projected onto the sky - that's why it appears bright along its outer edge.

Observations suggest the star ejected its mass in a series of pulses at 1,500-year intervals. These convulsions created dust shells, each of which contain as much mass as all of the planets in our solar system combined (still only one percent of the Sun's mass). These concentric shells make a layered, onion-skin structure around the dying star. The view from Hubble is like seeing an onion cut in half, where each skin layer is discernible.

Until recently, it was thought that such shells around planetary nebulae were a rare phenomenon. However, Romano Corradi (Isaac Newton Group of Telescopes, Spain) and collaborators, in a paper published in the European journal Astronomy and Astrophysics in April 2004, have instead shown that the formation of these rings is likely to be the rule rather than the exception.

The bull's-eye patterns seen around planetary nebulae come as a surprise to astronomers because they had no expectation that episodes of mass loss at the end of stellar lives would repeat every 1,500 years. Several explanations have been proposed, including cycles of magnetic activity somewhat similar to our own Sun's sunspot cycle, the action of companion stars orbiting around the dying star, and stellar pulsations. Another school of thought is that the material is ejected smoothly from the star, and the rings are created later on due to formation of waves in the outflowing material. It will take further observations and more theoretical studies to decide between these and other possible explanations.

Approximately 1,000 years ago the pattern of mass loss suddenly changed, and the Cat's Eye Nebula started forming inside the dusty shells. It has been expanding ever since, as discernible in comparing Hubble images taken in 1994, 1997, 2000, and 2002. The puzzle is what caused this dramatic change? Many aspects of the process that leads a star to lose its gaseous envelope are still poorly known, and the study of planetary nebulae is one of the few ways to recover information about these last few thousand years in the life of a Sun-like star.