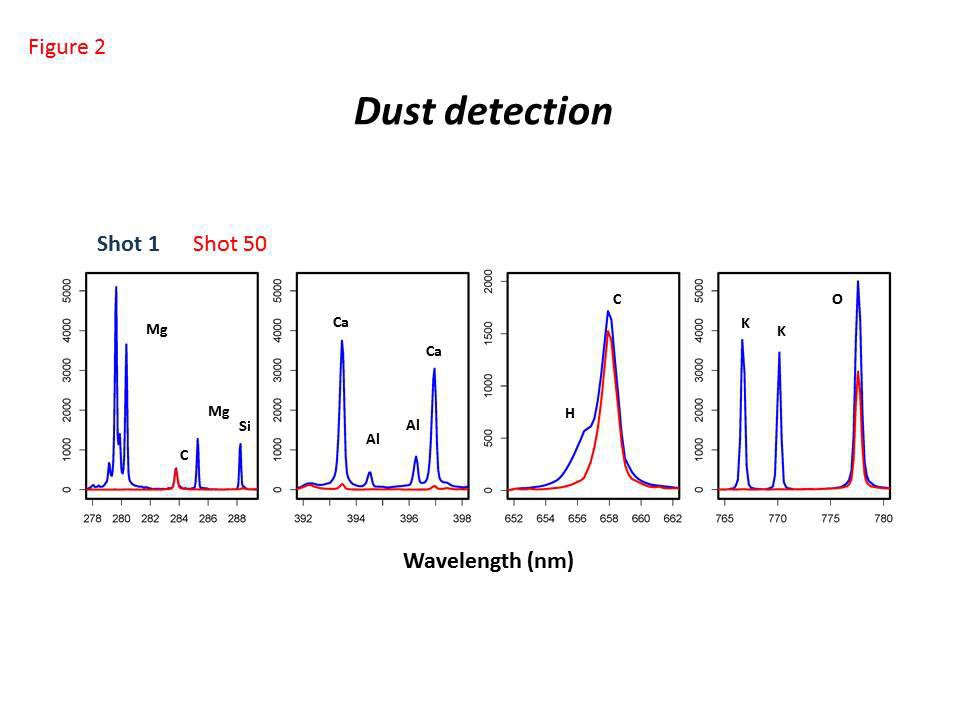 The Chemistry and Camera (ChemCam) instrument on NASA's Curiosity Mars rover fired its laser 50 times at its onboard graphite target during the 27th Martian day, or sol, of the rover's work on Mars (Sept. 2, 2012). This series of graphs shows spectral measurements from the first shot, which hit dust on the target, compared to spectral measurements of from the 50th shot, which hit only the graphite target material because early shots had removed the dust.

The Shot 1 spectrum reveals the composition of the dust layer covering the target, which includes, among other elements, magnesium (Mg), silicon (Si), calcium (Ca), aluminum (Al), potassium (K), oxygen (O), hydrogen (H), and carbon (C). The carbon lines are due to the coupling with the atmosphere, which is mainly carbon dioxide. Hydrogen reveals the presence of hydroxyl groups, water molecules or both. The Shot 50 spectrum is that of a carbon-pure target, with lines of carbon and oxygen only.

ChemCam observes spectral characteristics of dust on every first shot at any target analyzed on Mars.NASA's Jet Propulsion Laboratory, Pasadena, Calif., manages the Mars Science Laboratory Project and the mission's Curiosity rover for NASA's Science Mission Directorate in Washington. The rover was designed and assembled at JPL, a division of the California Institute of Technology in Pasadena.