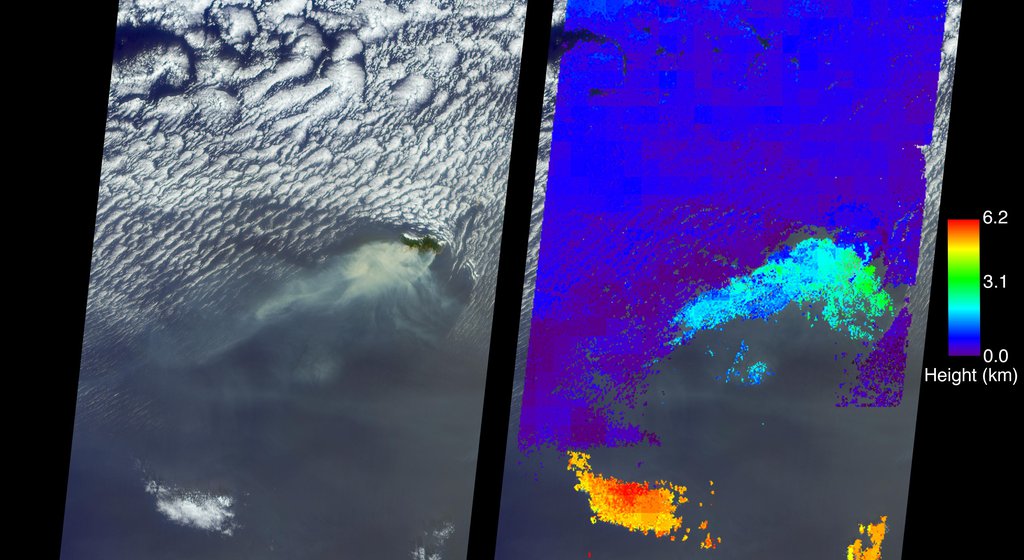 A wildfire spread to the capital city of Funchal on the island of Madeira, an autonomous region of Portugal, over the nighttime hours of Tuesday, Aug. 9, 2016, with three deaths reported and hundreds of others hospitalized. Several homes and a luxury hotel have burned, and a thousand people have been evacuated. The three fatalities are reported to be elderly people who were unable to escape when their homes caught fire. The fire ignited Monday, Aug. 8, after several weeks of scorching temperatures topping 95 degrees Fahrenheit and very dry weather. The entire island is only 30 miles (48 kilometers) from end to end, which naturally makes protecting the island's 270,000 residents and many tourists more difficult.

The MISR (Multi-angle Imaging SpectroRadiometer) instrument aboard NASA's Terra satellite passed directly over the island of Madeira on Wednesday, Aug. 10, 2016. The left image is a true-color image taken by MISR's 60-degree forward-pointing camera. This oblique view gives a better view of the smoke than a downward-pointing view. The island of Madeira is the only land within the field of view, and the smoke from the wildfire is being blown to the southwest. The city of Funchal is located on the southeastern coast of the island.

MISR's nine cameras, each viewing Earth at a different angle, can be used to determine the height of clouds and smoke above the surface in much the same way that our two eyes, pointing in slightly different directions, give us depth perception. The right-hand image shows MISR's publically available standard cloud top height product. These data show that the main body of clouds is indeed very low, less than 0.6 miles (1 kilometer) above sea level, while the smoke plume is about 1.9 miles (3 kilometers) high at the source, dropping lower as it is blown to the southwest. A stereo "anaglyph" of this scene is also available at PIA20886. As can be seen from both the MISR height product and the 3D anaglyph, the isolated clouds to the south are much higher than either the low clouds or the plume. Interestingly, the low clouds drop to almost sea level and then die out near where the smoke is present.

These data were acquired during Terra orbit 88524. Other MISR data are available through the NASA Langley Research Center; for more information go to http://eosweb.larc.nasa.gov/project/misr/misr_table. MISR was built and is managed by NASA's Jet Propulsion Laboratory, Pasadena, California, for NASA's Science Mission Directorate, Washington, D.C. The Terra spacecraft is managed by NASA's Goddard Space Flight Center, Greenbelt, Maryland. The MISR data were obtained from the NASA Langley Research Center Atmospheric Science Data Center, Hampton, Virginia. JPL is a division of the California Institute of Technology in Pasadena.