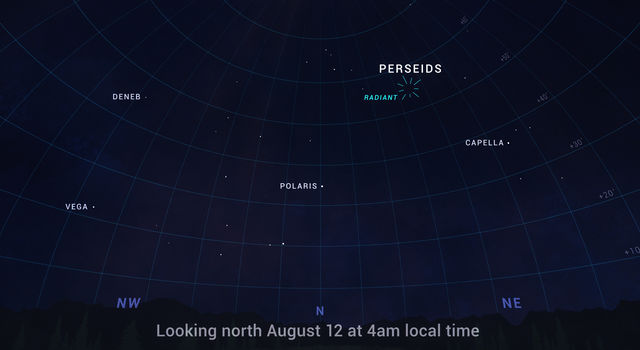 Peaks on the morning of August 12

The annual Perseid meteor shower lasts from July 14 to August 24, peaking on the morning of August 12. The last-quarter moon will interfere with the visibility of most fainter Perseid meteors this year, but you'll still be able to see a few brighter ones, including the occasional "fireball." The best time to look is in the pre-dawn hours on Aug. 12, but midnight to dawn any morning the week before or after should produce a few visible meteors. The Perseids generally appear to radiate from a point high in the north, called the "radiant." But you need only point yourself generally toward the north and look up.

The Perseids, which peak during mid-August, are considered the best meteor shower of the year. With very fast and bright meteors, Perseids frequently leave long "wakes" of light and color behind them as they streak through Earth's atmosphere. The Perseids are one of the most plentiful showers (50-100 meteors seen per hour) and occur with warm summer nighttime weather, allowing sky watchers to easily view them.

Perseids are also known for their fireballs. Fireballs are larger explosions of light and color that are brighter and can persist longer than an average meteor streak. This is due to the fact that fireballs originate from larger particles of cometary material. âº Read more about the Perseids

Learn more in this month's episode of NASA's "What's Up" video series:

Events are based on visibility in the Northern Hemisphere. Dates and clock times are for the Pacific time zone unless otherwise noted. Clock times are approximate and may vary depending on your north/south position in the U.S.